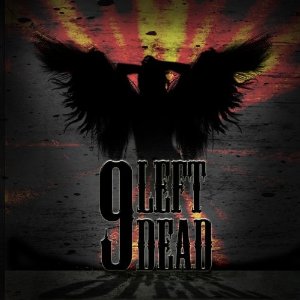 Oklahoma City rockers 9 Left Dead recently dropped their debut album, The Wrong Things, on Dirtbag Music, following on the heels of a lot of buzz and active rock ads across the U.S. for the first single, "Put Your Guns Down". Starting out in 1999 as Harmful If Swallowed, 9 Left Dead has grown over the years, with former prison guards Travis Jones (vocals) and Jared Ellis (bass) joined by Kreg Anthony (lead guitar); Nathan Parrish (rhythm guitar) and Bryan Whitley (drums) to form the current lineup.

9 Left Dead plays modern rock that blends in nicely on active rock playlists. In fact it blends in so well it’s difficult to tell 9 Left Dead from a host of other bands in the same musical demographic, a point that becomes apparent very early on The Wrong Things. Jones has a solid voice, but lacks the power or distinctive sound to make him truly memorable, and 9 Left Dead's sound is homogenized to maximize attention from radio programmers but fails to distinguish the band in the process. The songs on The Wrong Things are fairly average for the genre, with the lead single "Put Your Guns Down" sounding like action-movie soundtrack fodder. The highlight of the album is a cover of The Doors' "People Are Strange", and even here the band sounds like they're running through the song on automatic.

9 Left Dead has something of a reputation for their live performances; but none of that energy or panache carries over into The Wrong Things. There's just too little differentiation both within the music, and between the band and other acts in their genre to really make a strong impression one way or the other.