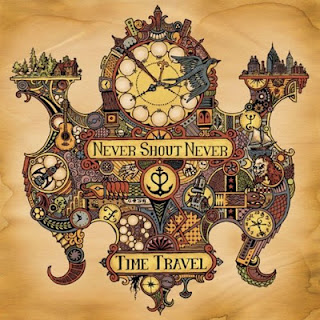 
Joplin, Missouri rockers Never Shout Never leap forth in 2009 with their first self-produced album, Time Travel. After several efforts at conforming their sound to the wishes of others, Never Shout Never speak fully in their own voices on Time Travel. The seismic shift in sound and style is a far cry from their previous effort, Harmony. Fans will either love or hate the new sound, but the change also opens the door to an entire demographic of new fans who enjoy modern rock deeply influenced by the sounds of the psychedelic 60's.


"Time Travel" is ethereal, synth-based anti-pop that sounds like a blend of Alan Parsons and Coldplay. The sound is intriguing, if a bit discommoding, "Awful" is anachronistically catchy, like a blend of The Beatles and ELO dressed in diatonics and fleshed out on the shared borderlands of Brit Rock and Prog. "Simplistic Trance-Like Getaway" is something of a love song, built from a subdued yet incessant melody and wrapped in full-bodied sound. "Complex Heart" sounds like an attempt to blend Adult Contemporary Pop and Emo styles in a fractious marriage that's overwrought and overdone. Imagine Queen meets Air Supply and you're in the ballpark. "Lost At Sea" plays to the prog and psychedelic image that Never Shout Never seems intent to craft. The modal vocal harmonies add cool effect, but the run on chorus contrasts poorly against the point-by-point quarter-note rhythms of the verse.


When a band takes back the reins on its sound for the first time after years of depending on other producers, the result is bound to be a bit messy at first. So it is with Never Shout Never on Time Travel. It's not a bad record, but Time Travel suffers from self-guidance by a band suddenly free to do what it wants, but uncertain about their chosen direction. It will take at least one more album, and some time on the road, for Never Shout Never to become fully comfortable steering their own ship musically, and the next album will be much more instructive about the direction of the band than is Time Travel. Nevertheless, this is a compelling document of a band in transition, with some almost brilliant moments to be found in the search.