Pinataland - Hymns For A Dreadful Night 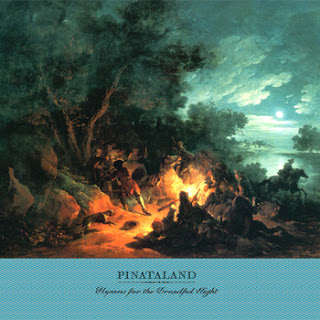 Pinataland – Hymns For A Dreadful Night
2011, Mekkatone Records
Pinataland is not your typical band.  Primary songwriters Doug Stone and David Wechsler has been writing and playing together since 1999, creating a distinctive Americana sound while focusing on characters drawn from American history and legend.  Supported by talented musicians such as Robin Aigner (vocals); Bill Gerstel (drums); Deni Bonet (violin); Gerald Menke (pedal steel); and producer/multi-instrumentalist Ross Bonadonna, Pinataland has received airplay and accolades from NPR’s “All Things Considered”, New Yorker magazine and All Music Guide.  Pinataland returns in 2011 with their third album, Hymns For A Dreadful Night, focusing on one dark and gloomy night, with historical figures appearing to tell their tales.
Pinataland opens with “The Dreadful Night”, a paean to a time before electricity when the night hours closed around people like a smothering cloak and imagination ran wild.  The song is played as a halting hymn, part prayer for protection and part vigilance.  It’s an intriguing folk/pop opener that gets your attention.  “Island Of Godless Men” is based on the perceptions of Dutchman Jasper Danckaerts upon his visit to Brooklyn in 1670.  The smoking, drinking and carrying on of its residents had Danckaerts seeing the impending end of the world, an upbeat lamentation that becomes a manic celebration of an end day that didn’t come.  “An American Man” honors Thomas Paine, who in spite of the fame of his works today, died penniless and practically unknown.  This is an intriguing number about changing perceptions and changes of heart.
“The Death Of Silas Deane” is about the intrigue and tragedy of Deane’s death.  A continental congressman who helped fund the American Revolution with French Loans, Deane fell victim to the intrigues of politics and internal affairs.  The song is well written, and the Stephane Grappelli-style violin work gives it a whirling, dancing feel that’s infectious.  Pinataland continues to write songs steeped in history and intrigue, but the music at this point begins to fade into a nominal phase where it’s more structure for the stories than intriguing in its own right.  The stories, however, are interesting enough on their own to hold the day.  “The Oldest Band In Town” in a tale of murder and intrigue set in The Bowery, while “Border Guard” frets over meeting the challenges of a new era.  “Hiawatha” is a solid cover of the Laurie Anderson tune that’s full of Americana references.  Pinataland closes with “Cemetary Mink”, visiting the corpses of George Washington boxer Jack Johnson and Marilyn Monroe, and offers interesting perspectives that look both forward and back.
Pinataland intrigues with their storytelling on Hymns For A Dreadful Night, but the music often takes back seat to the stories.  It’s a compelling listen, but there’s too much musical talent here for the final product.  Stone and Wechsler have an impressive supporting cast; one they could have made much better use of.  Still, Hymns For A Dreadful Night is compelling whether you’re a student of history, or just love a good tale.
Rating: 3 Stars (Out of 5)
Learn more at www.pinataland.com or www.myspace.com/pinataland.   Pinataland's website indicates that Hymns For A Dreadful Night has been released, but no online outlets are noted as of this posting.  Keep checking www.pinataland.com for availability.
Posted by Wildy at 7:01 AM