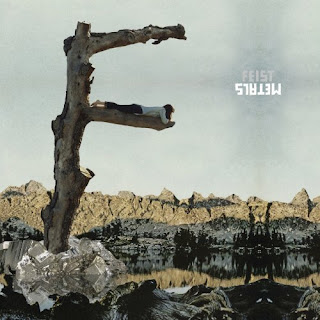 
Leslie Feist has never been about being cool. Her quirky voice and off-beat musical style has always allowed her to stand apart from the crowd, and her willingness to try almost anything has helped her to be innovative both as a songwriter and interpreter of music. Feist's first forays into performance were with a Calgary punk outfit called Placebo (not THE Placebo); this led, years later, to Feist joining Toronto alt-stars Broken Social Scene. Feist has also toured or recorded with Noah's Arkweld, By Divine Right, Peaches and Kings Of Convenience. The placement of her song "1234" in an Apple commercial in 2007 turned the plucky songstress into an international sensation. The song, an Indie release, rose to #8 on the Billboard Pop chart on the strength of downloads alone, and resulted in numerous awards.
This sort of success can either be a catalyst to greater things or the downfall of an artist. Many a songwriter has tripped on their own attempts to re-create such success. With Metals, Feist tries a novel approach, seemingly pretending it never happened. Rather than change course based on commercial pressures, Feist does what she's always done - follow the currents of her own muse wherever they might take her. Consequently, Metals is perhaps even quirkier than her previous works. Feist's salty, breathy voice bends itself through sounds that seem almost impossible to create at times, opening a window on her worldviews song by song.
"The Bad In Each Other" is a stripped down and primitive blend of Electro-folk and rock; an intriguing take on the phenomenon that happens when two good people with the best of intentions simply do not work together. Feist's insight is subtle yet distinct, highlighting the accident rather than the aftermath. "Graveyard" is a haunting, disjointed pop venture that's dark in aspect and incredibly varied in sound. Even within the bounds of standard pop song construction, the aching urgency of Leslie Feist's vocal line is the sort that stops people in their tracks. "Caught A Long Wind" struggles a bit, getting lost in its own esoteric arrangement, but the vocal is stunning.
Feist digs in with a soulful sound on "How Come You Never Go There", giving herself over to an edgy, string-based arrangement on "A Commotion". The quiet urgency in this number is compelling, perhaps even highlighted by the simple two-tone verse in contrast to the full-bodied, angular chorus. Feist settles in with fine performances on "The Circle Married The Line", "Bittersweet Melodies" and "Anti-Pioneer", lulling the listener into a well-satisfied and comfortable musical slumber. Taking everything down a notch further, she swoons into the fuzzy and effect-filled "Undiscovered First", transforming the experience into a power, anti-pop realization. The quiet genius of this song may not appear to you the first few times through, but will grow on you over time.
Feist strips the arrangement bear on "Cicadas And Gulls", a lovely folk ballad featuring guitar and voice. This quiet moment shines bright amidst its peers. "Comfort Me" is an acknowledgment that all is not as it appears. The urgency of this discovery grows in the energy and power of the song, a musical and emotional slow crescendo that breaks over the listeners like a rush of slow-moving emotion just before the song concludes. Feist wraps up with "Get It Wrong Get It Wright", a contemplative, dreamy number illuminated by a gorgeous melody and a matching vocal performance.
Feist does the only thing a true artist can do on Metals; she ignores the previous accolades and just keeps creating along the lines that please her most. Metals warms slowly, taking a few listens to really find a comfortable place in the listener's head, but those extra listens are very much worth the effort. There are many acts out there that talk this sort of unbending dedication to their art, but few live it as completely as Leslie Feist. Metals is neither the best nor worst work of Feist's career. Such distinctions mean little here. It is another set of musical children, born of a tremendous talent that sees the world in bright, illuminating colors, rather than the subtle shades of grey that dominate an increasingly cynical pop world.
Rating: 4 Stars (Out of 5)
Learn more about Feist at www.listentofeist.com or www.myspace.com/feist.

Please note that the Amazon.com prices listed above are as of the posting date, and may have changed. Wildy's World is not responsible for price changes instituted by Amazon.com.

For now, enjoy a clip of Feist from Sesame Street...