Sloan Wainwright - Upside Down & Under My Heart 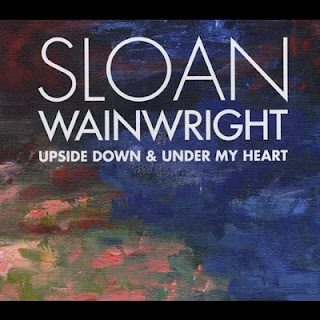 Sloan Wainwright - Upside Down & Under My Heart
2011, Derby Disc


In the beginning, God created Loudon Wainwright, III, and it was good. Later came Rufus and Martha, and then Lucy Wainwright-Roche, and all was well for a new generation. Yet quietly, in the midst of all this musical creation, another Wainwright voice emerged. Forged of earth and sky, the deep contralto of Sloan Wainwright arose from the earth. Many stopped and stared in surprise at this unknown commodity, hewn more from the classical bedrock of folk music than any of her extended family. Now, six albums and many accolades on, Sloan Wainwright continues as the quiet musical bedrock that serves as the contrast for a wildly talented and creative family. 2011 saw the release of Sloan Wainwright's sixth album, Upside Down & Under My Heart, chronicles the aftermath of the death of her husband George, and noble effort of a human heart to overcome, heal and begin anew.

Presence is a gift in an artist. It cannot be learned or taught, but the natural talent can be developed in one so endowed. Sloan Wainwright's presence on Upside Down & Under My Heart is preternatural, carrying a sense of spirit and truth that is compelling. Without artifice or affectation, Wainwright bears her heart in ten original songs that cut to the meat of human suffering, healing and survival. "Live Out The Best Of Your Life" is a mantra, of sorts, a challenge to wake up each day, put your feet on the floor and go on. Simple in sentiment and deep in meaning, it's the perfect opener, delivered in Wainwright's clear, natural voice. "Upside Down & Under My Heart" is a sweet country ballad written from an expectant mother to her unborn child. The almost melancholy arrangement is in counterpoint to the peaceful, loving words that pass from one to the other, in a moment of beauty so simple it shines. "Here I Am" plays like a song of becoming; of growing up, or of emerging from darkness into a new sense of self. Once again, Wainwright eschews fancy dress for simple truth, allowing the emerging beauty of the human heart striving to be itself shine through.


"I Can See Now" is a simple declaration; a matter of fact, beautiful poetic statement of account of one, again, emerging from darkness. Similarly, "My Song" is about establishing yourself once again. In the context of the album, it can be seen as re-claiming the sense of self that was shared for so long and then torn asunder. In this moment, Wainwright finds healing, even as the pain of loss continues to abate but slowly. "I Wear The Ring" plays in many layers, sounding at first like an expectant bride, but perhaps a node to the past rather than the future. The allegory of the road will not be lost on those who make their living from music, although here the road is more mystical than real. "Holland" represents a sense of moving on, finding the power to begin again amidst new scenery. The story is told alongside a stunning melody, simple in its beauty yet weighty in its power. "Little Bit Right" explores the struggle to feel okay about feeling okay, and Wainwright concludes with "I Am Free", a gone-but-not-forgotten anthem that declares health and happiness in the gift of the time left.

In many ways, Sloan Wainwright comes full circle on Upside Down & Under My Heart. What doesn't change throughout the album is the simple power of lyrics, and the utter beauty of the melodies she pares them with. Wainwright builds simple parts into sublime creations while exploring the depths of human pain and recovery without malice or spite; a refreshing approach on modern music, popular or otherwise. Upside Down & Under My Heart is too mature to be truly popular, unfortunately, but it is a wondrous work that deserves to remembered and recognized when the year-end lists come around.