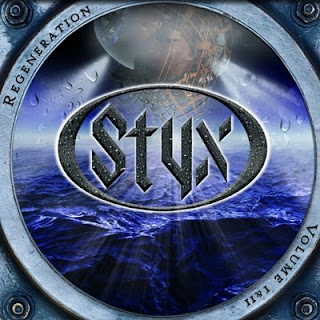 Like many classic rock bands subject to the avarice of labels who own the rights to their songs, Styx has seen a number of re-releases and repackages of their material over the years.  Since 2007 there have been no less than nine greatest hits/best of packages released in various countries around the world.  Not too shabby for a band that apparently can’t even get a grudging nod of respect from the folks at Rolling St…  I mean the Rock and Roll Hall of Fame.   Styx is back with another re-package of old hits, but this time it’s a bit more intriguing.  Regeneration: Volume I & II offers 15 new recordings of classic Styx songs, plus one new track.
Styx released Volume I and Volume II separately over the past year and a half, with the intent that the albums would be sold only at shows and on-line through the band’s fan club.  The secondary demand for the discs proved significant, however, and Eagle Records has packaged both albums in one set.  You can see our prior review of Regeneration: Volume I here.  Volume II runs in the same vein, with old Styx favorites getting new life from the current lineup.  Like Volume I, Volume II has a raw-but-polished quality, similar to a professionally produced live album.  Styx strives to capture the sound you hear in concert today on record rather than re-create the originals note-for-note.  The result is an exciting update to material that still seems vibrant even (in some cases) thirty-five years later.
The band revives such hits as “Blue Collar Man”, “Renegade”, “Miss America”, “Snowblind” and “Too Much Time On My Hands”, with Tommy Shaw and James Young belting out classic vocal lines.  In the process, Styx digs out a wonderful gem in “Queen Of Spades”.  Lawrence Gowan does a great job with this classic album cut, even if it doesn’t have quite have the dramatic sense of the original.  Styx also gives life to two cuts Tommy Shaw performed with side project Damn Yankees (Shaw, Jack Blades, Ted Nugent & Michael Cartellone).  “High Enough” and “Coming Of Age” always sounded like Styx songs and work very well in the context of the current lineup of the band.
Yes, there was much complaining on-line and in fan enclaves when Styx started releasing the Regeneration projects.  Fans who will never forgive the band for the departure of Dennis DeYoung scalded the remaining members for carrying on without him, but this is what bands do, like it or not.  Regeneration: Volume I & II isn’t about excising a former band member, it’s about putting Styx in a position to make a living off their own work, rather than having all of the licensing opportunities fall into the lap of a dying major label architecture more interested in profiting off its catalogue than actually building up artists for the future.  Regeneration: Volume I & II gives more than fair value; classic songs with an updated sound that’s as fresh and vibrant today as ever.
Rating:  4 Stars (Out of 5)
Learn more about Styx at www.styxworld.com.
CD                       Download
iTunes.
Please note that the Amazon.com prices listed above are as of the posting date, and may have changed. Wildy's World is not responsible for price changes instituted by Amazon.com.
Posted by Wildy at 7:20 AM

My only objection is the fact that the fans (like me) who purchased both volumes at shows kind of got screwed over (paid twice as much).