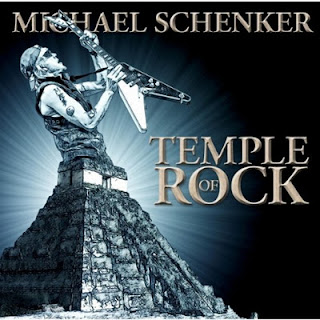 
The term gets thrown around loosely in modern jargon, but it's safe to say that Michael Schenker is a rock guitar legend. It's difficult to bring even one band into the world spotlight, but since the 1970's Schenker has been part of the rise of no less than three rock icons: U.F.O., The Scorpions, and The Michael Schenker Group. Schenker is a living relic of an age before computers controlled the recording process; still choosing to hand-make his albums with the technology of yesterday. This sound, which speaks of yesterdays still to come, is fully in evidence on Schenker's latest album, Temple Of Rock, due out on October 11, 2011.


While the sound still has some magic, Schenker's songwriting is dated, out of touch with both the times and his age. While many rockers of his generation have evolved as songwriters, Schenker is still prone to sing about parties, groupies and life on the road as if he were living it for the first time. While Schenker may lay honest claim to the material as one of the original purveyors of the sound, it sounds cliché. Schenker does tackle the senselessness of war ("How Long"), but otherwise dwells on more superficial material. That's not to say he can't still rock you once in a while. "How Long" will take you back to the 1980's so fast you might need a neck brace, and "The End Of An Era" sounds a bit like classic Guns N Roses. "Storming In" is the highlight of the disc, a vibrant, high-energy rocker you just can't get out of your head.


The guitar work is still all that you'd expect. Schenker has always been able to rip up a fret board like very few of his peers, and the support he gets from co-conspirators such as Carmine Appice, Herman "The German" Rarebell (Scorpions), Pete Way, Chris Slade and Doogie White (the Rainbows) is amazing. Still, the material on Temple Of Rock sounds horribly dated, as if Schenker was still trying to capture the glory of thirty years ago rather than create a vital new work. That being said, those longing for thirty years ago will be in their glory.