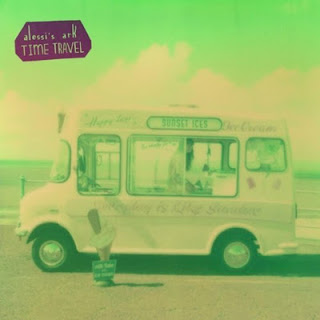 Alessi's Ark - Time Travel
2011, Bella Union
Alessi Laurent-Marke, AKA Alessi's Ark, left school at the age of sixteen to pursue a career in music, promising her parents she's come back in a year if the music thing didn't work out. Amazingly enough, she signed a major label deal with Virgin Records before her 17th birthday, and went on to record her debut album, Notes From The Treehouse, with producer Mike Mogis (Rilo Kiley). The album did well for Alessi's Ark in England, and she continued to play out extensively, but Alessi's Ark parted ways with Virgin in 2010, opting instead for Indie label Bella Union. One EP later, Alessi's Ark released her Bella Union full length debut, Time Travel, in the Spring of 2010, with a US release in September.
For all of the energy and personality Alessi's Ark brings to the stage, Time Travel is an amazingly passive record. Think Hope Sandoval without the smooth veneer, and this is the musical milieu that Alessi's Ark occupies for much of Time Travel. When she steps out of her protective shell, the artist is engaging. "Blanket" is the highlight of the album, with Alessi Laurent-Marke singing out in a voice strong and clear, showing a passion that is just too absent elsewhere. "The Robot" has a similar energy, and thrives in the quiet environment of the album, but listeners just spend too much time waiting for Alessi's Ark to do something interesting, with too few rewards in the listening.
Rating: 2.5 Stars (Out of 5)
Learn more about Alessi’s Ark at www.alessisark.com or www.myspace.com/alessisark.


Please note that the Amazon.com prices listed above are as of the posting date, and may have changed. Wildy's World is not responsible for price changes instituted by Amazon.com.
Posted by Wildy at 7:20 AM