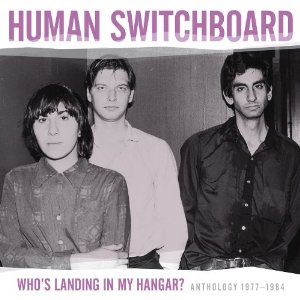 No one will hold it against you if Human Switchboard has escaped your attention before now. Their debut album, Who's Landing In My Hangar? was released three decades ago, and the darlings of the early 1980's New York City punk scene never really created a national footprint, but their influence is still felt today. The Beastie Boys, Mark Lanegan (The Screaming Trees), Chris Cornell (Soundgarden) and Kurt Cobain have all paid homage to Human Switchboard in the past, with Cobain referring to the band's "Refrigerator Door" as the "Stairway To Heaven" of punk rock. On October 24, 2011, Human Switchboard makes the jump to CD for the first time, with the release of Who's Landing In My Hangar? Anthology 1977 - 1984. The collection includes the complete original album plus various live and demo tracks. The 21-song CD also includes a download card that will allow listeners to download an additional 19 tracks on-line.
The disc itself shows a young band at the intersection of 1980's pop and punk, but affected by sounds of 1960's and 1970's rock and roll. The vocals are often pitchy, wavering from key to key oft times in the same vocal phrase, but the energy is great. There is a primitive feel to the album that is appealing; sounding more like a basement tape made by good friends than a professional produced album. Human Switchboard even work in the occasional Richie Cannata-style sax solo to complete the musical menagerie. Listeners will groove to the geek/pop/punk sound of "Who's Landing In My Hanger?); the bouncy energy of "I Can Walk Alone", and the Ramones-meets-The Knickerbockers sound of "(I Used To) Believe In You". Other highlights include "In My Room", "Shake It Boys" and "Fly-In".

Human Switchboard brings an American Primitive spirit to Basement Punk (the 2nd cousin to Garage Rock) on Who's Landing In My Hangar? Anthology 1977 - 1984. The additional tracks illuminate the best intentions of a band that might have done some great things over time, but the reality is that sometimes on solid album is the best hope of a band. It's hard to say Human Switchboard went out on top, but in an increasingly Indie music world, Human Switchboard gets many nods for being years ahead of their time in approach and style. The music of Human Switchboard is probably an acquired taste beyond its novelty and arguable historical value, but is worthy of some time and effort on the part of the listener.
Rating: 3 Stars (Out of 5)


Please note that the Amazon.com prices listed above are as of the posting date, and may have changed. Wildy's World is not responsible for price changes instituted by Amazon.com.
Posted by Wildy at 6:26 AM