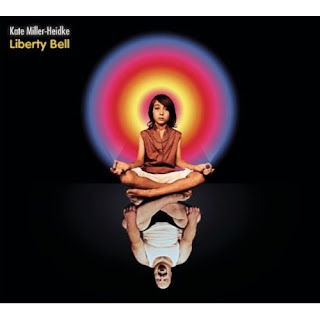 Kate Miller-Heidke - Liberty Bell
2011, Sony Music
Australian singer/songwriter Kate Miller-Heidke is an enigma. Classically trained, Miller-Heidke can sing folk ballads, electric dance tracks or classic opera arias with equal grace. Her rise to world-wide eminence was fueled by a viral video on YouTube for the song "Are You F###ing Kidding Me", but Miller-Heidke is a talented songwriter who doesn't let humor get in the way of great songwriting (and vice versa). Her quirky approach has been lauded around the world, and caught the ear of Ben Folds, whom Miller-Heidke spent a large portion of 2010 opening for. Miller-Heidke recently returned with Liberty Bell, the follow-up to Curiouser.

Liberty Bell kicks off with "Are You Ready", an infectious little tune that gets stuck in your noggin and bounces around for hours. It's a date night song that's sweet and quirky at the same time, and has been picked up for a NYS Lot commercial. Don't let that impugn the song however; this is a legitimate pop hit - light, fluffy and a lot of fun. "The Devil's In The Details" is a distinct change of pace; a lyrically minimalist dance track that's novel ear candy. Miller Heidke's songwriting partner and husband Keir Nuttall rips it up here with some intriguing guitar riffs and an energetic dance track that might just spawn its own dance. The pair keeps it simple on "Liberty Bell", an infectiously catchy and fun track that's danceable but retains enough organic pop sound to make it a potential pop hit. The brief chorus is reminiscent of They Might Be Giants in sound, right down to the angular guitar work and simple lyrical scheme.

"The Tiger Inside Will Eat The Child" is surprisingly bland dance-oriented pop, not the sort of material you'd expect from Miller-Heidke based on her previous releases. "Holloway Park" is cut from similar cloth, but Miller-Heidke recovers nicely with "Let Me Fade". While not her most engaging pure vocal performance, "Let Me Fade" is heartbreaking and powerful. The song is an apology and goodbye from a parent who loved imperfectly and rests at death's doorstep. The simple, piano-based arrangement enhances the power of the song. "You Got The World" is a catchy pop/rock number set to an incessant dance beat; a solid album track that might fit well on a movie soundtrack.

"Better In Spain" is a gentle rumination on a slower pace of life. The vocal harmonies on the chorus will catch your ear first, but this quietly well-written tune is more likely to grow on you over time than grab your attention the first time through. "Fatty Gets A Stylist" is an infectious novelty dance track that is likely to well in the clubs and would fare well in a Farrelly Brothers movie. The song is entertaining, and the vocal harmonies are stark and appealing, but fans of Miller-Heidke may feel as if this tune is below the level of her musical talent. "The Flasher" under-uses Miller-Heidke's impressive voice in another dance track sourced on loops and riffs. The arrangement is catchy, and is likely to do well in the club set, but is bit inane aside from the dance beat. Liberty Bell closes with "The Plane Went Down", a somewhat obtuse and dramatic narrative on a plane crash in the first person. Miller-Heidke is impressive on vocals, and the arrangement is well constructed, but the tune itself is likely to leave listeners scratching their heads.

Kate Miller-Heidke is a singular talent, as is her partner in crime Keir Nuttal. However it's not clear what the musical motivation is on Liberty Bell. Miller-Heidke's is a rare gem in the world of pop music, and her quirky sense of humor and personality allows Miller-Heidke to tackle traditional subjects in a non-traditional fashion. Her previous album, Curiouser, was full of heart, wit and several instances of pure pop magic. Those elements aren't exactly missing on Liberty Bell, but their clarity has been muddled by the striving for chart success. Liberty Bell is a solid effort that leans a bit too heavily on sound and effect and not enough on the natural musical talents of Miller-Heidke. This could have been so much more.


Please note that the Amazon.com prices listed above are as of the posting date, and may have changed. Wildy's World is not responsible for price changes instituted by Amazon.com.
Posted by Wildy at 7:17 AM

Labels: Imelda May, Kate Miller-Heidke, Keir Nuttall, Nellie McKay, They Might Be Giants