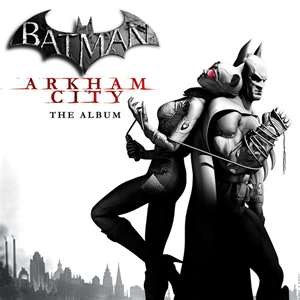 Batman: Arkham City – The Album
2011, Watertower Music
On October 18, 2011, Warner Bros. Interactive releases the video game Batman: Arkham City.  The follow-up to Arkham Asylum features many of the same gaming attributes, but enhances features, weapons and tools in an open world environment.  The soundtrack, Batman: Arkham City – The Album, drops on October 4, 2011, and includes some big names in active rock.
Panic! At The Disco kick starts things with “Mercenary”, an incredibly catchy rocker that’s certain to make room for itself on the Billboard charts.  It’s a perfect introduction; the sort of song that pervades your consciousness and refuses to let you go.  It’s the best blend of alternative/heavy rock and pop sensibilities on the collection.  Coheed And Cambria “Deranged” and The Duke Spirit “Creature” offer up solid if not terribly memorable tracks, while Black Rebel Motorcycle Club gets overtly ethereal on the dream-rock number “Shadow On The Run”.  Blacq Audio seem to be channeling 80s rockers such as the Thompson Twins on “Afterdark”, a solid enough track that thoroughly fails to fit in with the other tracks offered here.
Raveonettes make up for a lack of substance with lots of fuzz and buzz on “Oh, Stranger”, paving the way for ††† (Crosses) and their tortured, post-Smiths self-immolation, wrapped in dark commercial medal forms.  The Damned Things make a fine impression with “Trophy Widow”, dropping a tremendous chorus on listeners.  The blend of pop and metal sensibilities here is intriguing and unique, although the screamed verses are more of a contrast to the chorus than a complement.  Daughtry hits all the right notes on “Drown In You”.  The song is well-written, the arrangement tight, and the chorus sets up shop in your forebrain and declares its intent to stick around for a while.  The Boxer Rebellion offers up a solid effort in “Losing You”, but it’s Serj Tankian who steals the show with the closing track, “Total Paranoia”.  If you’ve never heard him before, Tankian has an eclectic and unusual voice that’s almost counterintuitive to this environment on first listen, but he grows on you like dark thoughts in the night.  “Total Paranoia” is an exceedingly pleasant surprise, and an example of how a music director, thinking outside the box on a project such as this, occasionally strikes gold.
There’s no doubt that Batman: Arkham City – The Album will turn out to provide far accompaniment to the game itself, but as an album it has little sense of flow; the songs here don’t have a common theme or driving factor other than the overly complex apocrypha of Batman storylines and legends.  Batman: Arkham City – The Album was put together with an eye toward download sales of single tracks rather than an attempt to build a cohesive theme, and it shows.  On the left, it’s difficult to build this sort of cohesion in a soundtrack collection featuring eleven different artists, which is why being the music director for this sort of project is a thankless exposition.  In any case, this is a time to pick and choose the tracks you want and download accordingly.  There are some real gems here.
Rating: 3 Stars (Out of 5)
Learn more about Batman: Arkham City at www.batmanarkhamcity.org.
CD                          MP3                    MP3 + Score
iTunes.

And if you're interested in pre-ordering the game, here are the links!


Please note that the Amazon.com prices listed above are as of the posting date, and may have changed. Wildy's World is not responsible for price changes instituted by Amazon.com.
Posted by Wildy at 7:55 AM