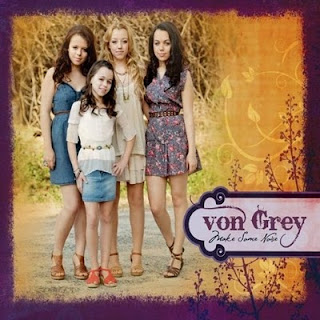 von Grey – Make Some Noise
2011, von Grey
von Grey is a family quartet based out of Alpharetta, Georgia.  Sisters Kathryn (16), Annika (15), Fiona (13) and Petra (11) are making some real noise in the country world.  Starting out as a chamber music quartet under the name Kannafitra in 2007, the classically trained sisters soon expanded into an Appalachian blend of Bluegrass, Folk and Celtic sounds.   In 2009 the band changed their name to von Grey, and have been developing their songbook ever since.  The band has already won the Lilith Fair Local Talent Search”, and sisters Annika and Fiona have shared the stage with the Chieftains.  Annika even won the 2008 U.S. 12-and-under Irish Fiddler’s competition.  There’s no denying the talent in the band, and when you hear their tight, 3- and 4- part harmonies on their debut E.P., Make Some Noise, you’ll be hooked.
von Grey opens with “With You I Can”, a catchy piece of country/pop with an impressive modular vocal harmony sound.  von Grey sounds radio-ready here with a sound that’s a bit young but not in an unappealing sense.  “Next To Nowhere” is a solid entry, showing off the quartet’s wonderful harmonies.  “Eyes On Your Honey” is a highly infectious country number with a touch of rock and roll attitude.  It’s a song all about what she wants in a boy, and has a chart-ready chorus you won’t be able to shake.   “She’s A Wildflower” shows lead vocalist Kathryn to be the real deal.  The songwriting and the instrumental net behind her are equally impressive.   von Grey closes with “Make Some Noise”, a catchy country rocker that shows off the more playful side of the group.
von Grey shows off a distinctive vocal mix on Make Some Noise; the filial connection between the sisters offering a unique blend.  At the same time, it would be nice to hear a bit more complexity in the vocal arrangement; passing notes, counter-movement, etc.  Be that as it may, the ladies of von Grey get inside of your head with their catchy songs and distinctive sound, and threaten to stay long term.  There are two or three songs here you simply won’t be able to shake, nor will you want to.  Von Grey sounds like they are destined to be chart gold.
Rating: 3.5 Stars (Out of 5)
Learn more about von Grey at www.vongrey.com or www.myspace.com/sistervg.
CD                     Download
iTunes

Please note that the Amazon.com prices listed above are as of the posting date, and may have changed. Wildy's World is not responsible for price changes instituted by Amazon.com.
Posted by Wildy at 7:41 AM