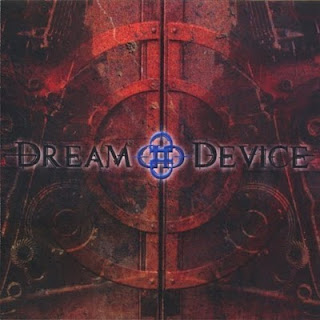 Dream Device – Dream Device
2010, Canadian/American Records / Caprice International
Columbia, Pennsylvania quintet Dream Device is an all-original hard rock band that plies its trade on a regional basis and has begun to build a local buzz fueled by hard-driving riffs and big rock arrangements.  David Trageser (vocals); Ken Hess and Adam Grieger (guitar); Shaun Hinks (bass) and Scott Waltz (drums) leave nothing on stage, playing with a live intensity and hunger that is refreshing.  The band’s debut album, Dream Device, marks an earlier effort at songwriting and marshalling the band’s live sound in-studio.
Dream Device makes a varied impression on listeners, showing the band’s ability to rock alongside a surprising pop sensibility.  Unfortunately there’s also a surprisingly tame general sound; quite in contravention with their live reputation.  “Won’t Let You Die” is a great, high octane opener, laced with heavy guitar.  The production draws that sound way back, however, burying the vocals and lacing the song with a rather out-of-place sounding cowbell.  “Crucifixion” derides a self-made martyr in somewhat stereotypical terms, and “Washed Away” is far too tame.  “Just Wait” shows real pop sense, blended with elements of 1980’s classic rock.  Unfortunately, Dream Device spends the rest of the album mired in an attempt to hold back their sound.  The production on Dream Device does the band no favors, working to pin back the band’s signature sound rather than bring it forward.
Production aside, the songs and performance on Dream Device is a bit uninspired; that of a young band more enamored in making a record than understanding why they are making a record.  There’s no sense of purpose or theme here that bridges to the listener.  We’ll have to assume that this is just an awkward first step from a band that was still finding their footing and their sound.  Dream Device certainly gets high marks locally for their live performances, so perhaps time (and a new producer) will bring out the best in their next effort.
Rating: 2 Stars (Out of 5)
Learn more about www.dreamdevicemusic.com or www.myspace.com/dreamdevice.
CD                         Download
iTunes