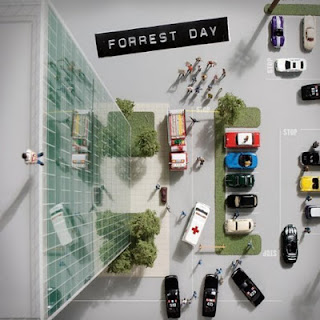 Tragedy and comedy are the two extremes borne of the chaos of life. Tragedy is often accompanied by mirth, and comedy often hides sadness at its core. The juxtaposition of these two extremes offers insight into the madness that roils all of us, and the beginning of understanding. If one were to write an academic paper on Forrest Day, this might be the opening paragraph, for Day seems to understand the interoperability of tragedy, comedy and chaos better than most. His debut album, with his like-named five piece band, is a treatise on the hardships and hard-won victories of life, seen through the wisdom of knowing sadness and humor, and wrapped in an innovative blend of hip-hop, rock, jazz and electronic musical sounds.
Day writes, raps and sings without filters, discussing his own struggles with mental illness and coping with day-to-day life in song. The best of his material sounds like an ingenious blend of Was (Not Was), Beck, They Might Be Giants and Fatboy Slim, alternating between talk-sing and full-singing styles in a voice that's pleasantly imperfect. Day exposes the humor in awkward moments, like on the opening track "Sleepwalk". This catchy, talk/sing number is born of rhythmic madness and a varied arrangement with a Middle Eastern flavor. It's very rare to find anything in pop music that even approaches unique, yet Forrest Day just might have a claim here. "Hyperactive" is catchy and incessant, with a stream-of-conscious lyrical makeup that keeps pounding away at your brain with ideas. The allegory of both message and sound intrigues. "River Rat" is incredibly infectious. If there's a bonafide pop and dance hit on the album, this is it. Day turns wryly observational on "Baby Shoe", before launching into the declarative anthem "Everybody’s F###ing With My Mind". This high energy romp simply adds to the fire, and is itself another potential hit.
Day turns more mellow as the album progresses, capturing a distinctive groove with "Without A Trace" that's part mystery show theme song and part Spanish Jazz/Hip-Hop hybrid. Perhaps not as vibrant or mind-bending as some of his other material, Day manages to such in listeners here with a quietly compelling number that slowly and stealthily grabs more and more of your attention. "The Grease" sounds like The B-52's playing a James Bond theme with a rap/spoken-word vocal based in madness. The disjointed and disturbed lyrics are compelling, beckoning you on if simply to see where Day will end up. "A$$holes" has a reggae flavor and an entertaining take on unemployment. Day goes all-vocal on "Headfirst", a self-dissection on motivation and creation. The mellow vibe here offsets a nervous energy that runs through the arrangement, creating an interesting bit of cognitive conflict in the process. Forrest Day concludes with "It's Just Me", sounding like a hybrid of classic 1950's pop and hip-hop, dressed up with mariachi horns. The laid back vibe here is appealing, and the lyrical resolution of the tragic comedy is perfectly crafted.
Forrest Day is a revelatory introduction to both the man and the band. The intellect, energy, inspiration and pure musical genius of the album is hard to define, and impossible to ignore. Forrest Day is one of the most innovative albums to be released thus far in 2011, a year to be remembered as the the one in which the pop music world finally saw the Forrest for the trees.
Rating: 4.5 Stars (Out of 5)
Learn more about Forrest Day at www.forrestday.com or www.myspace.com/forrestday.  Forrest Day drops on October 11, 2011.

Labels: Beck, Fatboy Slim, Forrest Day, They Might Be Giants, Was (Not Was)

Quite possibly my favorite review of Forrest Day, ever.