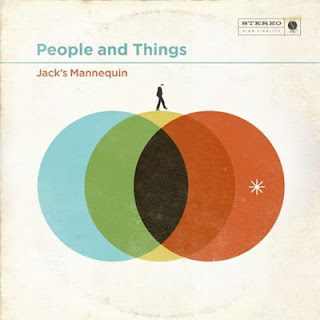 Orange County, California rockers Jack’s Mannequin are living proof that sometimes your second thought turns out best.  Started as a side project from front man Andrew McMahon’s other band, Something Corporate, but has moved front and center since the band’s inception in 2004.  Rounded out Bobby Anderson (guitar); Mikey “The Kid” Wagner (bass); and drummer Jay McMillan, Jack’s Mannequin has gone on to release two Top-10 albums and a number of successful singles.  Their latest effort, People And Things, is Jack’s Mannequin’s most mature work to date.

"My Racing Thoughts" kicks off People And Things with a full-bodied, Adult-Alternative sound full of solid hooks and impassioned vocals. This is a great opener, full of big energy and a chorus that sings itself to you. "Television" has the majesty of a U2 tune, combined with an emotionally tortured mindset. The two build into in intensity, feeding off one another on a high-energy, mid-tempo chorus that is perfect for pop radio. "Amy, I" is a love song, overcome by intensity and lack of understanding. She's gone, but he's in the depths of love and dejection. The tenor of the song is upbeat, but the lyrics betray the darkness within.

"Hey Hey Hey (We're All Gonna Die)" is a great, swaying rocker that wants to be an anthem. The song manages to soar almost in spite of itself on superior songwriting, a phenomenal chorus and an honest nature that is impossible to resist. "People, Running" is a catchy number about the intrinsic pointless of what we do, and the entertainment it provides. It's a wonderfully catchy rocker that should fare well with commercial radio. "Platform Fire" fits well into the template of adult alternative pop that seems to be the model for People And Things, while "Hostage" is a solid expansion that dances on the edge of Americana song construction in the chorus while lapsing back into a solid pop chorus. Jack's Mannequin strips away the extras on "Restless Dream", a moving acoustic relationship post-mortem. Regrets roll through a sweet melody buttressed by gorgeous but sparse vocal harmonies around Andrew McMahon's affecting vocal line. People And Things winds down with "Casting Lines", a song about the inevitability of ending up back where you started, no matter the choices you might make. It's a gorgeous closer full of deep thoughts and deeper emotions.

Jack's Mannequin makes the most of People And Things, occasionally hitting a slow moment but generally getting the job down with a big, enjoyable alt-pop sound and the impassioned vocals of McMahon.  Lyrically there are some rough spots and occasionally uncomfortable metaphors or phrases, but in generally the songwriting is solid. Jack's Mannequin will do well with this one.


Please note that the Amazon.com prices listed above are as of the posting date, and may have changed. Wildy's World is not responsible for price changes instituted by Amazon.com.
Posted by Wildy at 7:41 AM