Lady Antebellum - Own The Night 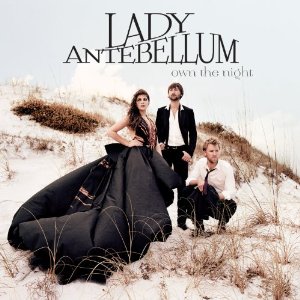 Multi-platinum recording artists Lady Antebellum suffer an identity crisis on their latest album, Own The Night, vacillating wildly between 1980's pop and thinly veiled 1980's pop thinly veiled as country music. The blend largely explains Lady Antebellum's popularity, as many of today's pop/country fans were Garth Brooks converts from the 1980's rock and roll they grew up on. Not there is anything wrong with any of these styles, but Lady Antebellum's latest plays more like a closely surveyed, market-designed product than an album of original art.

Things start out well with "We Owned The Night". The 1980's pop theme is definitely here, but it's accompanied by a memorable chorus and a great melody. Even "Just A Kiss" satisfies as the sort of love song you might have heard at a junior high dance circa 1985. Unfortunately, Lady Antebellum slip on their own formula and fall into the soup for much of the rest of the album, playing sounds and styles certain to register high for pop and country radio programmers, and forgetting the passion and energy that have made such stars so far.

It would be easy to blame this one on the greedy record labels. It would be entirely in character for a label to push an already uber-successful band to alter their sound to maximize the profit potential of an album, but it's a shame to hear a band with real talent give in so whole-heartedly to the corporate shuffle. There are moments here when Lady Antebellum shines like the sun, particularly on the track "Love I've Found In You", but there's an overarching feeling of cliché to Own The Night that's impossible to ignore.

Please note that the Amazon.com prices listed above are as of the posting date, and may have changed. Wildy's World is not responsible for price changes instituted by Amazon.com.
Posted by Wildy at 7:02 AM

The song is everything a country tune should be: deep, meaningful lyrics, excellent musicianship, and passionate singing and playing. The song is so familiar I was humming away with it the first time I listened. Another highlight is "As You Turn Away," a song with a catchy hook and incredible vocal melodies and harmonies. If you liked Lady Antebellum's two previous albums, or if you're a fan of country music, you'll love this. Highly recommended!!

Lady Antebellum's music is another case, and can be found listed under Contemporary & New, Country Rock or Modern depending on cheap lady antebellum tickets the songs she has record at the time, so it's quite not easy to 'pigeon-hole' any singer and say they are a meticulous 'style' of singer, at slightest not now.