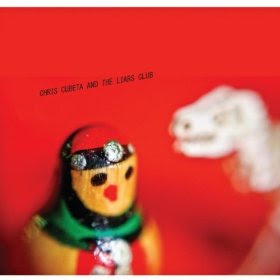 
Chris Cubeta And The Liars Club is practically a New York City institution.  Not only have the Brooklyn-based roots-rock trio have played some of the hottest clubs in New York, they’ve also toured extensively in support of artists such as The Wallflowers, Suzanne Vega, Will Hoge and others.  This summer, the band released their third album, an eponymous, 11-song collection that is in the spirit of the band’s past work, but stretches the band’s musical boundaries more than just a little bit.


The album sets sail with a brief intro, a sonic prologue to the first song, "All We Are". "All We Are" is a striking Americana exploration of how we are lost in found in new cities, new experiences and new smiles. The catchy, active arrangement leads to a circular realization that nothing changes in spite of our attempts to hide from who we are. "Truth Be Told" is a compelling and catchy number full of dark need, from the mournfully energetic verses to the Police-style breakdown at the end. The song is full of angular guitar work and screams for you to listen closely and dig into the depths of its layered sounds. Chris Cubeta And The Liars Club strip down the sound on "Approach", a straight-forward rocker with a quiet pop sensibility and relentless build into a chorus that gets stuck in your head. Cubeta's voice won't floor you, but is affably pleasant and easy to listen to throughout the album.


"Lana" opens with a catchy guitar-driven run, reminiscent of the Gin Blossoms (right down to Cubeta's vocals.) This song is a sure winner, a pop-inflected, Americana-flavored rocker that you won't be able to get out of your skull. "Midnight" is an interesting change of pace; an orchestrated, lush arrangement with an air that can only be described as optimistically melancholy. This quiet moment is abruptly upended when Cubeta launches into the urgent "I Need You There". The crunchy, sparse song construction provides the perfect edge, competing to complement and contrast to Cubeta's lyric rock voice.


Cubeta quietly explores the feelings of sorry and abandonment of a relationship lost in "No Idea", trying to explain to the one who wronged him what she's done. The lyrics are factual and representative without anger. The arrangement more than makes up for the lack, as Cubeta lays down blistering guitar runs and solos to accentuate every tempestuous spike of anger. "Apathy" is a solid album track, exploring the intricacies of an emotion more complex than it might first appear in a relentless arrangement. "I'm Sorry" has a laid-back, vaguely psychedelic feel that comes across in the stripped-down, acoustic-ambient structure. There's a pensive sorrow here that's almost more intellectual than emotional, and plays itself equally in the arrangement and the vocal line. Cubeta winds things up by continuing the thoughts of "I'm Sorry" into "You Should Be Too", transitioning from acoustic to full-scale electric arrangement without giving up the essential flavor of the song. This switch up is an intriguing way to say goodbye, a parting shot and words of wisdom all rolled into one.


Chris Cubeta And The Liars Club craft dusty diamonds from mundane soil on their self-titled album, living in the valley that exists between Americana and edgy rock and roll. Even with the occasional ambient intervention, the pop sensibility that pervades this album is irresistible. Cubeta's everyman voice is appealing, and he always plays it off to best affect against arrangements that range from quiet ruminations to crunchy, roots-based rockers. This is one of those albums that will get its hooks into you early, and keep getting better with time.