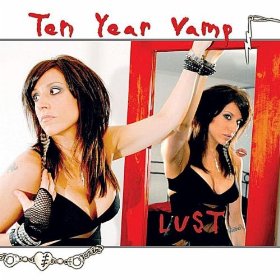 
Albany, New York rockers Ten Year Vamp would appear to be on an inexorable rise.  For an Indie band working outside of the major label framework, Ten Year Vamp has been extremely successful at getting their music placed/licensed, and has even managed to chart in Billboard magazine.  The band itself is as tight as a wire, and lead vocalist Debbie Gabrione is the type of front woman who can captivate an audience from the first note.  The band’s last album, 2009’s Don’t Act Like You Know Me, received top billing on year end charts, and had several tracks voted best song of 2009 across the Mediaverse.  Ten Year Vamp returned recently with a five-track EP entitled Lust, exploring the human conditions of love in lost in highly catchy modern rock arrangements.


Lust opens with "Got 2 Me", an amped up love song about the power of love to turn her head. The high energy rocker is full of honest vulnerability meshed with toughness that's appealing in a 1980's Pat Benatar style. "Thinking Of Me" keeps the temp and energy going with a catchy rocker that seems ripe for use in a edgy romantic comedy. Gabrione's vocals are superlative as always, and you simply won't be able to sit or stand still. Ten Year Vamp slows things down a bit for "No Risk", a passive, maudlin ballad that overstays its welcome. The song is well-played, and the vocals are excellent, but the song seems sorely out of place here. Gabrione and company rev it up again with "Making Me Want You", a feral rocker full of love and lust. Amazing pop sensibility and fiery rock sound are perfect complements here. Ten Year Vamp wrap things up with "Don't Be Alone With Me", a solid rocker that fits in with the general theme of the EP but doesn't have quite the same energy level.


Debbie Gabrione and Ten Year Vamp are impressive as always. Her vocals are matched step-by-step by strong play from the rest of the band. Lust is an uneven experience, with Ten Year Vamp running full throttle on three of the five songs presented here. The slower moments don't reflect poorly on the band, but just don't seem to fit well together with the other tracks.


Learn more at www.tenyearvamp.com or www.myspace.com/10yearvamp.  Purchase information is below, but if you are one of the first ten people to email Ten Year Vamp at info@tenyearvamp.com, with a subject line of "FIRST TEN", you'll win a signed copy of Lust!