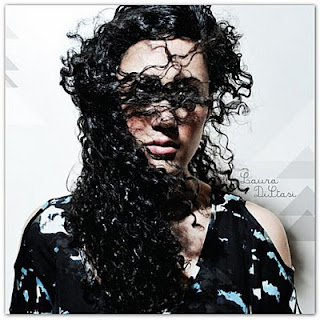 Laura DiStasi - Laura DiStasi [EP]
2011, Laura DiStasi
Laura DiStasi is a songwriter of substance; the sort who makes an impression that stays with you long term.  Born of southern New Jersey and now calling New York City home, DiStasi captures the urban landscape in song, both in the hardship of a granite city and the loneliness of the many walls.  Her third EP, Laura DiStasi, digs at the wounds of a life spent living so close to so many and yet so far away, ultimately closing on a moment of beauty within the madness.
DiStasi opens with "Colors And Shapes", an intriguing comparison between anonymity in a large city and in a relationship. It's all about getting lost in something that distracts you from what you want or need to do. DiStasi shows a distinctive lyrical subtlety married to a solid, melancholy pop arrangement. "Humming Along" is a run-on rumination on a relationship in a rut. DiStasi shares this internal dialogue in song, displaying conflicting senses of frustration and desire. The lush, folk/pop setting is the ideal complement. "Go On" is meandering and melancholy, a reproach of a partner who simply won't commit. DiStasi cycles through disenchantment, monotony, realization that things won't change, and ultimately separation. The incessant nature of the song overmatches the message however, as pacing and intentions struggle to match one another. DiStasi closes with "Covered In Snow", a musical water-color exploring the illusion of rebirth at the first snowfall of the year. DiStasi celebrates the sense that things might be better, even while not letting go of the reality of before.
Laura DiStasi proves to be the real deal on her self-titled, debut EP. With a gorgeous, dulcet voice, and a lyrical refinement that's both intelligent and elegant, DiStasi crafts highly personal stories that are colorful and universally accessible. DiStasi does struggle a bit with the pacing on one track, but otherwise delivers consistently well-written songs, and performances full of presence and personality. Get to know Laura DiStasi. You're going to be hearing a lot more from her.