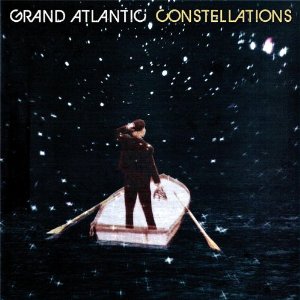 Brisbane, Australia rockers Grand Atlantic have big ideas. Taking their name from The Grand Atlantic Hotel, Grand Atlantic evokes thoughts of the psychedelia and shoe gaze blended in a David Bowie meets The Dandy Warhols pastiche. All of this is rooted in a distinct melodicism born of influences such as The Beatles, Ray Davies and Brian Wilson. After playing SXSW and Canadian Music week in 2010, Grand Atlantic toured across North America and released the album How We Survive. The reaction from commercial radio was positive, with more than 50 stations picking up Grand Atlantic. The band struck gold when featured on Gossip Girl.
Thankful for the exposure, but not wanting to lose track of their creative purpose, Grand Atlantic returned home and undertook the writing/recording of a new album, the recently released Constellations. Recorded at the Seacliff Lunatic Asylum, an abandoned psychiatric hospital near Dunedin, New Zealand, Constellations has a sparse, psychedelic cast that's attention grabbing.

Constellations kicks off with "Carved From Stone", featuring a wall-of-sound fullness that washes over the listener. Behind this is a somewhat bland core, but the song is an effective first impression with which to open. "Control Station Blues" is an intriguing juxtaposition of styles. Imagine mid-career, techno pop U2 trying to achieve the same feel as a garage band. After numerous listens it's still not entirely clear if this mix "works", but the attempt is so compelling, and the song is driven by such a bitter energy it stays with you. "Searchlights" is a slow-grinding monster, shoe-gaze power-pop that pulls you along in its relentless wake.

This general mood of slow and inexorable music progress plays out over several tracks, including "Constellations", "Mountains Too Steep" and "Poison To The Vine". Grand Atlantic finally breaks out on the high-energy "Fresh Ideas In Home Security", bringing a chutzpah and charisma to match the big sound they convey. Things slowly settle through "Voyager" and "No Man's Land", ultimately subsiding in the dispassionate "Queenie."

Grand Atlantic struggles to match big sounds, big ideas and sufficient energy on Constellations. Loaded with talent and good intentions, Grand Atlantic seems to shoot for the stars on every track. An admirable goal, but sometimes a softer approach can serve to highlight the true highs.
Constellations shows the outline of the sort of band Grand Atlantic will eventually become; with flashes of greatness visible in the clouds. As they develop their own path further, they'll fill in the gaps that become apparent on Constellations. In the mean time, this is a great effort, even if the band's energy and enthusiasm are ill-managed at times. A good producer who understands and will work with the band's vision, but also can manage their collective vision and energies into a narrower focus would transform an album with great potential into a great album. That is the ultimate moral of Constellations.

Please note that the Amazon.com prices listed above are as of the posting date, and may have changed. Wildy's World is not responsible for price changes instituted by Amazon.com.
Posted by Wildy at 7:15 AM