Camera - The Panic And The Permanence 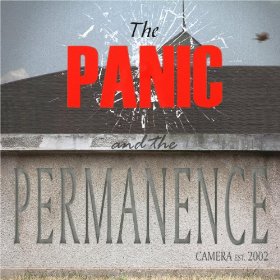 Camera – The Panic And The Permanence
2013, Camera
Art rock might not be the right term to describe Camera’s third album, The Panic And The Permanence, but you might be hard pressed come up with another moniker that fit quite so well.  Camera approaches every song they touch with a hint of punk attitude.  Their off-kilter pop sensibilities can be jarring at times, and the band has no pro-forma conceptions about song structure.  What they do have is an eclectic rock sound that’s a mix of the B-52’s, The Bogmen and Green Jelly.  Highlights include the dark, catchy gem “Grazed By Bullets”, “Pop Radio 101” and “Buried Alive”.  Camera can be maddening at times as well, falling into musical mood swings that leave the listener out in the cold, wondering what just happened.  Despite this, The Panic And The Permanance charms with its rough cut humor and ‘tell it like it is’ attitude.
Rating:  3 Stars (Out of 5)
Learn more at www.cameraband.com.