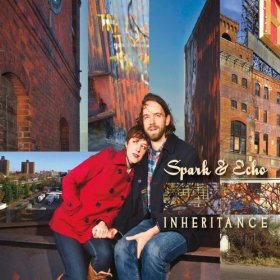 Spark & Echo – Inheritance
2012, Spark & Echo
Spark & Echo is perhaps one of the most perfectly named acts I’ve ever come across.  The duo comprised of husband and wife team Jonathon Roberts and Emily Clare Zempel has a back story that’s as interesting as their music.  Born in Middle America, each began their love of music at an early age.  The two met at an audition for jazz choir in college and eventually began to date.  Graduate school came for Emily, while Jonathon headed out for the road.  The inevitable breakup came; but years later they were reunited in New York City through church.  The echoes of the past wore at them, but it took time.  They eventually reconvened their relationship, and combined musical direction, as Spark & Echo.  The duo has a passion for telling some of the more bombastic stories from the Bible in song, and this passion is unmistakable on the duo’s sophomore album, Inheritance.
Spark & Echo’s unique musical perspective is very evident throughout Inheritance.  Most intriguing are the album’s imperfections.  Roberts’ voice is pleasant to listen to, and he shows off a rather impressive falsetto range at times during the album, but his pitch and tone can suffer at inopportune times.  Zempel’s voice is similarly untrained, although there is an edge to her sound that is appealing.  The compositions are generally well crafted, but the marriage of music to lyric is sometimes forced.  In spite of this, Inheritance works on several levels.
To begin with, for whatever weaknesses you might perceive in Roberts and Zempel, the blend of their voices is perfect.  Their two voices sound like they were made to fit together.  The energy on the album is unflagging, even on the slower songs.  Spark & Echo creates out of a love for making great music, and also for their subject matter.  This goes a long way.  Finally, there is a musical wanderlust that wends its way through Inheritance, with Spark & Echo willing to follow wherever the song leads.  Whether its They Might Be Giants influenced alt-pop (“Buy Me A Hat”, “What A Day”); jazz/soul (“Inheritance”); Latin Pop (“Yo Sé”); or even French Chanson (“Battles”); Spark & Echo finds a way to entertain and inform.
Rating: 3 Stars (Out of 5)
Learn more at www.sparkandechoband.com.

Labels: Emily Clare Zempel, Jonathon Roberts, Spark and Echo, They Might Be Giants

Thanks Wildy, this is a really fun review... You were reviewing our album but you somehow captured our marriage too and that's very sweet, our imperfections coming together to make it work–the whole better than the sum... :) Thanks for this and for listening to our music. Keep up the great work!
-Jonathon from Spark & Echo

The fact that I was able to touch on that all means you have woven those things deeply into your music. And really, that is why two souls are joined in marriage, to fill in the gaps (with a little extra help from above). :)

Thank you for sharing the album with us.