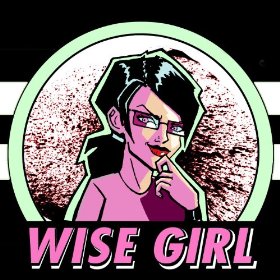 Wise Girl – Wise Girl
2012, Wise Girl
Wise Girl is the latest project for New York native Abby Weitz.  The former front woman of punkers The Lookaways, has previously been featured in such NYC clubs as Sin-E, Lit Lounge, and CBGB’s as well as playing the Van’s Warped Tour.  Wise Girl has been a mainstay in clubs since their inception in 2010, and will soon be featured on Beta TV, which reaches over 100 million homes.  Wise Girl recently released their dynamic self-titled debut EP.
Wise Girl is a tight musical outfit, but Abby Weitz is a tour de force.  She takes control from the opening notes of “Roles Are Reversed”, a delicious mix of rock and country.  Weitz is eminently affable, and you’ll have a hard time getting this tune out of your head.  “Set In Stone” is a catchy, rhythmic rocker with a hook-filled chorus that screams hit.  This exploration of low-scale heartbreak that builds over the years is infectious and smart.  Wise Girl goes for a classic pop/rock sound on “Wishful Thinking”, using big guitars and a swaying feel to hook you and pull you in.  This song has it all, a full sound, big harmonies, and a dynamic star turn from Abby Weitz.
Wise Girl is the real deal.  The musical composition and presentation on Wise Girl is top notch, but Abby Weitz is a star in waiting.  The full range of pop and rock and roll is represented here with even a bit of country flavor on the opening track.  Wise Girl has major commercial potential.  Don’t be surprised if the names Wise Girl and Abby Weitz are everywhere one year from now.
Rating:  4.5 Stars (Out of 5)
Learn more at www.wisegirlmusic.com.