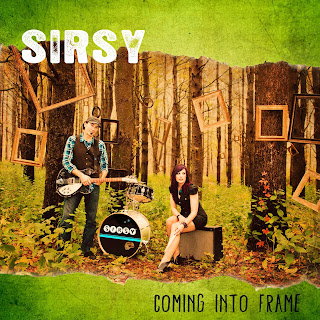 Sirsy – Coming IntoFrame
2013, Funzalo Records
Sirsy is one of the hardest working bands in rock androll.  The Albany, NY based duo hastoured relentlessly since their inception in 2000.  Along the way, Sirsy has opened for such actsas Grace Potter and the Nocturnals, Maroon 5, Blues Traveler, Collective Soul,Cheap Trick and Lifehouse.  Fully independentuntil their signing with Funzalo Records in 2010, Sirsy has the distinction ofbeing the only Indie band to crack Soundscan’s Top Ten.  Last month Sirsy released their first albumcompleted while under label influence and 10th overall.  The title, Coming Into Frame, suggests a band coming into their own.  The truth is not quite as clear as theimplication.
The fact that is that one of the qualities that has madeSirsy so appealing to fans over the past 13 years is their raw rock and rollsound.  Coming Into Frame takes that edgy appeal and puts a fine polish onit, under the watchful hand of producers Paul Kolderie (Hole, Belly, The MightyMighty Bosstones) and Sean Slade.  Thatfine polish curdles the sound a bit, however, as the pure personality of frontwoman Melanie Krahmer gets waxed over for the first time in the band’scareer.  The soulful sneer of the openingtrack, “Cannonball” is whitewashed in this setting.  Likewise the bluesy touch of “Lionheart”,which ends up much less vital than it should be.
Sirsy gives in to label sensibilities on tunes such as “BraveAnd Kind” and “Lot Of Love”, which don’t have the raw edge of their earlierrecordings.  Melanie Krahmer still hasstar power with a voice that shows shades of Chrissie Hynde and Joan Osborne,and guitar/bass man Rich Liburdi helps to keep the ship steady.  There are some fine moments here, such as thecatchy pop/rock of “Red Letter Days” and the memorable “Killer”, but Coming Into Frame just doesn’t seem tohave the same spark and fire as earlier Sirsy recordings.
Rating: 3 Stars(Out of 5)
Learn more at www.sirsy.com.
Posted by Wildy at 5:00 AM