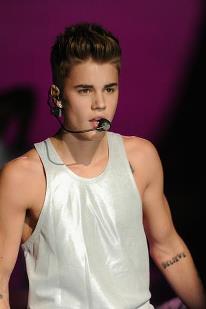 Island Def Jam Music Group confirmed today that JustinBieber will be heading into the studio starting May 15, 2013 to record a tribute album to Bob Dylan.  “It will be a newand exciting direction for Justin” stated Executive Producer Scott “Scooter”Braun.  Sources at Island Records confirmed that Bieber is looking for a more mature sound as he moves into his twenties.  One source even hinted that some of Bieber’s recent erratic behavior (such as wearing a gas mask inpublic), is Justin’s way of getting into the protest song mindset.
Current plans call for an album of 12 Dylan covers, 2 Dylan inspired originals penned by Bieber himself, and a mega dance mix.  Dylan has apparently signed off on the project, and is considering a duet with Bieber on “The Times They Are A-Changin’”.
Such career moves for young pop star are hardlyunprecedented.  It will remain to be seen whether Bieber’s young Believers will follow him into the world ofcountercultural folk/pop music.  It will also be a challenge for Bieber to convince music fans who have already writtenhim off as a teen (or tween) phenomenon to take him seriously.  Having Mr. Dylan on board will obviously help on that end.  It will be curious to see where this leads.
Posted by Wildy at 6:48 AM