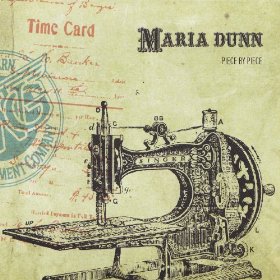 Maria Dunn – Piece By Piece
2012, Distant Whisper Music
Maria Dunn is perhaps one of the finest folk singer/songwriters Canada has to offer.  The Scottish-born performer who makes her home in Edmonton has one Juno nomination (2002) and two Independent Music Award nominations (2013) under her belt. Her songs have been covered by such artists as Niamh Parsons, Bob Bossin, Aengus Finnan and The Outside Track.  Dunn’s fifth album, Piece By Piece, documents the story of immigrant textile workers at Edmonton’s GWG factory.  Stark, lonely and beautiful, just like their protagonists, Maria Dunn’s songs shine like the gems that they are.


Dunn begins by documenting the act of leaving home to make a better life in “I Cannot Tell You”.  She gets all sides of the story here, from the love of those who send a child off to greater opportunity to the loneliness and determination of the one who moves on.  Dunn captures the beautiful rough edges of humanity in song here, with a voice that is as wonderfully hand-crafted as her songs.  “Speed Up” deals with the plight of the worker, of whom more is always expected without the commensurate rise in recompense.  What starts as a challenge to improve becomes a race to keep up, else opportunity is lost.  “Blue Lung” documents the malady of textile workers in a denim factory.  Dunn’s arrangement is perfectly fit to the tale of an inevitable conclusion for those who (quite literally) give their life to the factory.
“Assunta’s Song” covers the worries and hopes of the wife of a World War II soldier who is working while he is away.  Gypsy violin dots the soundscape here, intermittent to some haunting vocal harmonies.  Dunn finds a perfect moment in song and seems to live it as if it were her own experience.  This is a powerful voice, and Dunn’s voice is absolutely gorgeous.  “Shareholder’s Reel” is something of a social revolt amongst workers against the big wigs.  The push for more and more is stopped dead in its tracks by people rising up in their own interest.  It is the spirit that led to organized labor in the U.S. and Canada that inspires this song; A spirit that was needed for a time when workers rights were thoroughly trod upon by robber barons and thieves.


Dunn finds another moment of perfection on “Immigrant Dreams”, with her voice carving out of the either the eternal reach for a better tomorrow through hard work, love, dedication, and a sense of honor that is an afterthought today.  For all that has come before, there is little to say or do to prepare the listener for “Lullaby”.  Dunn finds a moment of musical transcendence in a simple arrangement that is haunting and beautiful.  If you aren’t moved you simply aren’t listening.  Dunn closes with “Farewell”, a solid end to a memorable album that serves as balm and reminder of the struggle documented herein.
Maria Dunn blends Celtic, folk, bluegrass and old school country in wondrous ways throughout Piece by Piece.  Her songwriting is exquisitely crafted, underwritten by a keen storyteller’s sensibility.  It’s not uncommon to find storytellers who are fair songwriters or vice versa, but Dunn is the complete package.  Her arrangements, simple or otherwise, are as expressive as her words.  For all of this, it is Maria Dunn’s voice that makes the sale.  Beautifully imperfect, and full of the haunting qualities of loneliness, love and pure will, Dunn’s voice rings true of conditions both human and divine.  Maria Dunn is one of a kind, and Piece by Piece can be nothing other than a Wildy’s World Certified Desert Island Disc.  This one’s an instant classic.


Rating: 5 Stars (Out of 5)
Learn more at www.mariadunn.com.