Myloe - Empty Out Your Mind 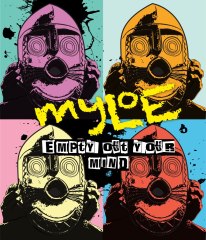 Myloe - Empty Out Your Mind
2012, Myloe
Myloe is an enigma.  Originally formed by Berklee student Fred Mubang in 2012, the band has grown to include Mubang on guitar and songwriting duties; Alan Hokom on vocals and guitar; Tom Shani on bass and Zach Mullings on the drums.  The style and sound on Myloe’s Empty Out Your Mind evokes thoughts of the progressive era of classic rock, as well as jazz, new wave and even a touch of reggae.  Unusual song structures and occasionally even time signatures show up in the music, and the musicians in the crowd will be intrigued. Andy Warhol fans will even be enamored with the themed cover art.

Myloe kicks things off with the energetic pop/rock title track, which laments the state of a world in decay. Vocalist Alan Hokom is memorable and vibrant, and the band manages to rock out for five plus minutes on big hooks and even bigger pretensions. The reggae bridge is stylish and an intriguing turn, but actually saps the song of some of its vigor. "Paradox" features more of a droning alt-rock style and is dressed in darker musical undertones. The energy is still very much there, and Hokom works the lead like a classic front man. "In Your Eyes" explores the bounds of insecurity and insecurity as impediments to a life fully lived. Myloe works a prog rock archetype sewn with melancholy in the inseams for a wonderfully melodic and dark anthem.

On "Sidetracked" Myloe plays to all constituencies, incorporating elements of pop, classic rock, funk, jazz and bossa nova in a wonderfully varied and yet cohesive arrangement. "Standstill City" opens with a bass riff reminiscent of Jethro Tull before turning into an angular rocker with dynamic harmonies and a driven, stream of thought style vocal line. The guitar work here is stellar, and Myloe appears to be hitting on all eight cylinders. Empty Out Your Mind fades out to the expansive and guitar driven meditation "What Is Paradise". There is a weighty angst around this song that's built of disillusioned beliefs and dashed dreams. It's quite a listen, and will have the guitarists in particular out there trying to recreate some of the wonderful textures in the arrangement.
Myloe certainly has something interesting cooking on Empty Out Your Mind.  From the deliciously angular guitar work at the outset to the well-crafted arrangements throughout the EP, Myloe is a musical force to be reckoned with.  Add to it the precise songwriting of Fred Mubang and the high energy performances of vocalist Alan Hokom and you have a recipe for grand success.  This is the sort of EP that can break a band in a big way.


Rating: 4 Stars (Out of 5)
Learn more at www.facebook.com/myloetheband  or myloe.bandcamp.com.