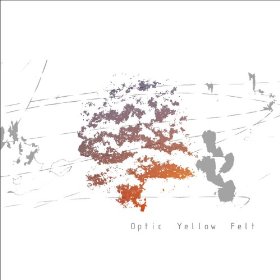 Optic Yellow Felt – Optic Yellow Felt
2011, Catapult
You have to say one thing for Optic Yellow Felt, they are certainly original.  From the name, to their sound, there isn’t a great deal about Optic Yellow Felt that you can pin down to someone else.  Except for their vocalist, that is.  Fans of the Rheostatics and Martin Tielli will be very curious to hear lead vocalist Victor Nader, whose vocal sound is eerily similar to those of Tielli.  Optic Yellow Felt took over a year to record their self-titled debut album, working closely with producer/sound engineer Roy Cicala (Elvis Presley, John Lennon, Frank Sinatra, Bob Dylan) to bring the band’s original sound and style out in the recording.
Formed by brothers Victor (vox, guitar) and Lino Nader (bass, backing vox) while living in the United States, Optic Yellow Felt has grown to six members.  Nando Morsani (piano, vox); Ricardo Pires (sax, vox); Eduardo Marson (guitar, vox) and Tiago B. (drums, vox) round out the lineup.  The songwriting style is rough at times, but there is a certain charm in Optic Yellow Felt’s music that is hard to ignore.  Victor Nader writes in stumbling style, almost as if he is falling into his thoughts than thinking them.  This comes to light on the opening track, “Captain Of The Seas”, a perseverating love song that goes in logical circles.  This leads into the ambient singer/songwriter air of “Close To Sadness”.  While Nader has a similar sound to Martin Tielli, he doesn’t appear to have the breath support that leads to good pitch and tonal control.
The album becomes a study in intriguing and sometimes chaotic arrangements, and a well-meaning but ill-trained vocalist with an enigmatic sound but poor fundamentals.  Optic Yellow Felt likes to experiment with multi-part song structure, but on more than one occasion kills off a song before it even gets going with extended introductions.  Like most bands with potential Optic Yellow Felt manages to pull off one track late in the game that really reflects what they are capable of.  “Talkin’ N Talkin’” is a solid love song with some real potential.  It’s easily the best composition on the album, and gives you a hint as to where Optic Yellow Felt might go in the future.
Much of the rest of Optic Yellow Felt is the audio document of a band trying to figure out who they are and what their sound is.  The songwriting is uneven and rough (but not without its little golden moments).  Optic Yellow Felt is sort of a hipster act; messy and still figuring itself out, but purveying an original sound that has yet to have the rough edges worn smooth.  Don’t be surprised if Optic Yellow Felt becomes something of a phenomenon down the line.  For now, there is still work to be done.
Rating:  3 Stars (Out of 5)
Learn more at web.oyf.com.br.