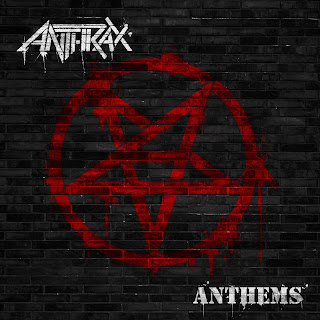 Anthrax – Anthems
2013, Megaforce Records
Anthrax might just be the most storied metal band to ever come out of New York City.  Contemporaries of Slayer, Megadeth and Metallica, Anthrax have been a heavy metal force over the past 30+ years.  With ten albums and numerous world tours under their belt, entire generations of metal musicians owe at least part of their musical lineage to Anthrax.  The events of the past few years have been surprising, not the least of which is the return of long time front man Joey Belladonna to the fold.  Anthrax is currently preparing for their eleventh album, to be released later in 2013.  For now the band has released an eight song EP entitled Anthems, comprised of six classic rock covers and one original song in two versions.
The idea of a cover project seems anathema to a band like Anthrax, but in the end it turns out to be a rather pleasant surprise.  The EP kicks off with a vibrant cover of “Anthem” (Rush).  Anthrax treats the song with reverence, kicking it out with energy, power and a distinctive precision that does the original proud.  “T.N.T. (AC/DC)” is a rollicking good time.  Things get a bit surreal with the cover of “Smokin’” (Boston), with Anthrax quite possibly bettering the original.  And while they don’t quite surpass the originators of “Keep On Runnin’” (Journey), they certainly give the current formulation of that band a run for their money.  Cheap Trick’s “Big Eyes” gets a wonderfully dark reading, and “Jailbreak” (Thin Lizzy) is full of all the mischief of the original.  Anthrax winds up with the original tune “Crawl” in its original form as well as in the “Orc Remix”.  The song is well-crafted and much more pop oriented than previous work by Anthrax, but positions them well for a potentially huge comeback in 2013.
Anthrax is surprisingly supple and graceful in covering some major hits of 1970’s and early 1980’s rock and roll.  Anthems is a cover project, but Anthrax manages to show off some very subtle yet distinctive changes in musical personality.  Anthems is thoroughly enjoyable, and Joey Belladonna’s voice is amazing.  Hard core fans of the band might be a bit taken aback by the sound of Anthems, but there is no doubt that this metal for the masses.
Rating: 3.5 Stars (Out of 5)
Learn more at www.anthrax.com.