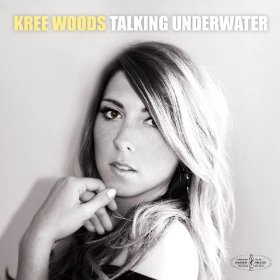 Kree Woods – Talking Underwater
2013, Zodlounge Records
It’s refreshing to find a pop singer/songwriter who doesn’t play to the pretentions of modern pop.  Nashville native Kree Woods is just such an artist.  Her debut EP, Chance Happening, made some waves in the Indie press in 2012, and Woods is wasting no time in moving forward.  On April 9, 2013, Kree Woods releases her first full-length album, Talking Underwater.  It is an album of drawn-out heartbreak, and ultimately, redemption.  This is not a unique tale, but Woods sings it in a voice that is sometimes vulnerable and sometimes strong (with the two states never being far apart).  Her arrangements are subtle and layered, and as beautiful as her voice.
Woods kicks off with the title track, asking for release from a relationship that is going nowhere.  This is a very slick pop offering written in melancholy ballad form, but Woods maintains a wonderful energy in her voice.  “Just Go” is all emotional angst; driven by her love’s desire to save her from the end they both know is coming.  “Flip Flip” sounds like the title to a vacuous pop number, but nothing could be further from the truth.  Here Woods establishes herself as an intelligent and subtle lyricist, with a talent for gentle but persuasive pop hooks.  There is also positivity to Woods’ songwriting that is refreshing.  Even when she is talking about something difficult she is working to be respectful and kind in the way she presents the material; in spite of this Woods is very clear on what she feels.
“Cut My Strings” is a melancholy ballad with a beautiful melody.  Woods brings it to life with her voice, which is equal part Emily Saliers, Joni Mitchell and Sarah Solovay.  “Happiest Day” is a love song that celebrates the little moments; a catchy little tune you’ll be humming to yourself for days.  Kree Woods hits the heights with “Green”, finding a near-perfect pop moment.  The song is about the expectation of a breakup; dreading the moment but looking forward to the release afterward.  It’s an utterly human and heartfelt inner dialogue that’s without rancor.  “Save Her” finds Woods taking a tragic story and lighting it from the inside with her voice.  The effect is a musical bas relief that is stunning to hear.
“Blink” is beautiful in its simplicity; a friend reaching out to offer perspective during dark times.  It’s a reminder to keep your eyes open for the good things else you miss them.  Woods’ voice is wonderfully attuned to this moment.  Much the same can be said for “Lonely In Chicago”, in spite of the distinct difference in mood.  This is an artful diary entry in song, exploring the loneliness of being half a continent away from you true love.  The verses are well-written, but the chorus and bridge are utterly brilliant.  This is a potential movie soundtrack lead song.  Woods uses her voice as an artistic representation of collapse in “Cave In”, creating a moment of beauty where backing vocals surround her voice like a halo.  The song itself is stark and simple, and all the more striking for it.  Woods closes by shaking free of the emotional baggage with “Fake (Shake It Up)”.  This is a great little pop anthem about being true to yourself, written from the perspective of a nice girl who isn’t going to drag anyone through the mud on her way out the door.  There’s no pettiness or vitriol here, just an eye on a better future.
Kree Woods is a breath of fresh air.  Her positive approach to songwriting shows an inherent respect for herself and others that seems like the product of an earlier generation.  Woods’ melodic sensibilities were made for popular radio, and her subtle compositional style is smooth and sweet to the ear without falling into the slick clichés of the eternal balladeer.  Woods spends the bulk of Talking Underwater telling true stories from her heart in unvarnished yet poetic ways.  She wraps these stories in pop/rock musical blankets that are comforting and complete, but driven by a vibrant heart that strives to bring light into the world.  Don’t be surprised if Talking Underwater makes a star of Kree Woods.
Rating:  4.5 Stars (Out of 5)
Learn more at www.kreewoods.com.