Brian Dolzani - If I Don't Speak A Word 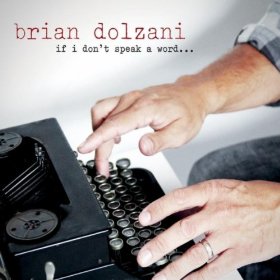 Brian Dolzani – If I Don’t Speak A Word
2012, Brian Dolzani
Growing up, Brian Dolzani was the quietest kid in school.  His old school mates are often shocked to find out he chose the career of a singer/songwriter.  But churning around in all of that quiet was whirling mass of raw emotions that have oft-times been bigger than the man.  Dolzani documents many of his internal struggles, and the effects they’ve had on his relationships, in If I Don’t Speak A Word.  Comparisons to Freedy Johnston, Jules Shear and Neil Young give you an idea of the style and sound, perhaps, but Dolzani is truly an original.
It’s not any one particular quality about Dolzani that makes the album a stand out, unless you consider abject honesty to be a musical quality.  Dolzani’s voice wouldn’t get him on American Idol, and there’s no brash or eclectic style here.  Dolzani thrives on telling his own stories honestly, with bumps and bruises showing, and in taking responsibility for the things he owns.  He starts with “Older Now”, acknowledging that things change with perspective and time, and also expressing a sort of gratitude at being around to know these truths.  All of this is delivered in an unvarnished style that is refreshing and real.
Dolzani wades through botched relationships (“Not As Lonely”, “Fair”); personal imperfections (“Broken”, “Autumn In Central Park”) and attempts to make things right (“Before Goodnight”, “I’m Sorry Now”), while following the steps toward a better life.  It’s sort of a 12-Step program set to music, but with all of the messy twist and turns that define humanity.  The most compelling moment of the album is “Hey Dad”, and open letter in song to Dolzani’s father, who passed away when he was fifteen years old.  The raw emotion and perspective in this song are impossible to ignore, and Dolzani’s entire journey on this album hinge around this song and the events it documents.  Dolzani also manages to hit home with “Wilted” a song about the natural process of decay as it applies to people and relationships.  There’s a pragmatic air to the song, a sad and knowing nod to the idea that is the natural order rather than something to weep over.
Brian Dolzani is a solid, stand-up singer/songwriter who sings from the heart, shaped by a mind bent on understanding what went wrong and how things can be better.  His plain-spoken vocal style is reminiscent of a time before auto-tune, a time when voices were what they were, and compelling stories were often told in less than perfect sonic states.  The fact is that Brian Dolzani delivers the goods on If I Don’t Speak A Word, carving out a story that’s tragic at times, but also shows that redemption is still very much a part of the human story.  Dolzani tells the story with articulate grace and raw emotion, tempered with the perspective and maturity that only mistakes can bring.  It’s real, compelling and true.
Rating:  4 Stars (Out of 5)
Learn more at www.briandolzani.com.