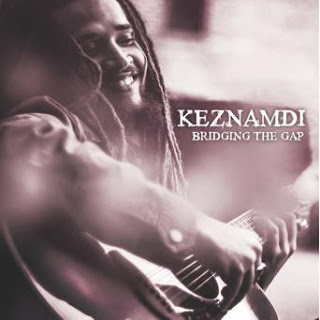 Keznamdi – Bridging The Gap
2013, Keznamdi
Keznamdi is an ambassador, of sorts.  You see, the man was born to make music.  His parents, the co-lead vocalists of international reggae band Chakula, immersed their children in music from a young age.  Keznamdi came to the United States to attend college for the opportunity to broaden his musical experiences and opportunities and to play Division I soccer.  Both opportunities served him well, and Keznamdi is now building the foundation of his own career in music.  Keznamdi’s debut EP, Bridging The Gap, shows an artist who overcomes genre and misunderstanding in one fell swoop.


Bridging The Gap kicks off with “Darkness”, a message to the politically and powerfully way placed that they will not get away with exploiting the poor.  It’s a pre-revolutionary message that is powerfully in simplicity.  The message will carry well in the current day and age, and Keznamdi builds around it an arrangement that’s equally fitting for a dancehall or a radio playlist.  Kabaka Pyramid lends his talents here.  “My Love For You”, featuring Chronixx, is a radio friendly love song that mixes Reggae, pop and R&B.  Keznamdi is convincing and charismatic here, and the song works on several levels at once.  “I Don’t Wanna” is the sleeper on the album, but with just voice and a rhythmic acoustic guitar.  This was a pleasant surprise, and may ultimately be the most radio friendly track on the album.  Give this the right remix and it will be a dancehall hit the world over.
“Weekend” is a mooning ballad that gets stuck under its own weight.  This is perhaps the weakest track on the album, but Keznamdi manages to sell it anyway.    “Just Vibe” works on the simplest level.  It is a clear reflection of what the artist wants to find.  From a songwriting perspective it’s passable, but doesn’t have the strength of its convictions to make it all happen.  Keznamdi closes with “I Don’t Wanna”, a wonderfully catchy mix of reggae and folk that you won’t be able to get out of your head.  Once again, with the right remix this could be a major hit.


Keznamdi brings a positive vibe to Bridging The Gap, exploring love and social justice amidst generally well crafted and occasionally catchy songs.  There are rough spots, of course, but Keznamdi overcomes with a gentle force of personality and presence.  Bridging The Gap does more than its name; it redefines the boundaries for reggae in the popular Rome.
Rating:  4 Stars (Out of 5)
Learn more at www.keznamdi.com.