Sunday Wilde - He Gave Me A Blue Nightgown 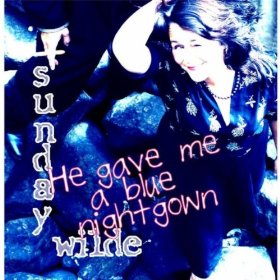 Sunday Wilde goes from the back woods to the top of the Blues charts with hernew album; He Gave Me A BlueNightgown.  The follow-up to 2010’s What Man!? Oh That Man!!! sticks withthe earthy and elemental blues sound that is Wilde’s trademark, but also showssomething of a softer side.  The earlyreturns are in: He Gave Me A BlueNightgown hit #1 on Airplaydirect’s Global Blues Charts, and has been aFeatured Pick To Click on BB King’s Bluesville (SirusXM).
What works sowell for Sunday Wilde is that she doesn’t just sing the Blues; she lives andbreathes the essence of the art. Surrounded with primarily acoustic instrumentation, you could easilyimagine Sunday Wilde in the early days of the blues in Chicago, Memphis, oranywhere else that heartbreak and hard times reign supreme.  Wilde shines on songs such as “Captured Me”, “Sunday’sLoverman”, “Tell Me To Hush?” and “I Guess I Didn’t Hear You Right”.  She shines, yes, but there are moments whereWilde exceeds a simple shine in an elemental explosion.  One such moment is “Shaken Down”, where Wildelaments getting taken in by something of a con man.  This number has a rock and roll feel, and isdelivered with whip smart intelligence and a theatrical flair.
“He ThrillsMe Up” has a similar energy and presence, and is carved from Wilde’s emotionalbedrock.  “Joy Can’t You Shine” plays asimilar pastiche, this time as hope mixes with sorrow.  Wilde saves her best for last, however.  “Amazing Grace” is drawn from the fundamentof The Blues, and riven raw emotion. Such gets deeper on “Blue Spirit Blues”, where the floodgates comeloose.  Sunday Wilde sings and howls fromthe very depth of a broken soul, getting back to the very elements that make upthe human heart.  The core of sufferingparlayed into song is deep, dark and yet somehow still full of hope.  The moment is utterly elemental and real, andSunday Wilde wields it like a monument.
He Gave Me A BlueNightgown is worthy of attention. Indeed, it is worthy of the chart position it has attained thusfar.  Don’t be surprised if Sunday Wildebreaks out bigger than she has thus far with her latest work.  He GaveMe A Blue Nightgown shouldn’t surprise anyone with a Juno, or perhaps evena GRAMMY nomination. Sunday Wilde is the Queen of the Blues.
Rating: 4.5 Stars(Out of 5)
Learn more at www.SundayWilde.com.