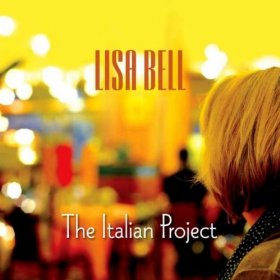 Lisa Bell – The ItalianProject
2013, Lisa Bell
Colorado based singer/songwriter Lisa Bell has been offeringup her brand of original, positively-themed music for more than a decadenow.  While empowering others is at thecore of what she does, there is no denying that Bell is a talented songwriterand vocalist.  Bell got her startinterpreting Jazz standards, but quickly moved into the realm of originalmusic.  Her musical travels and travailshave seen her working with artists such as Bill Payne (Little Feat), Nelson Rangell, Gabriel Mark Hasselbach and Machan. Along the way she’s also opened shows for Christopher Cross, StanleyJordan and Oleta Adams.  Lisa Bell’sfourth album, The Italian Project wasborn of collaborations from new friends and colleagues gained over recent toursof Italy.
Lisa Bell is not one to be nailed down to one particulargenre, but she does sound most at home in that particular mix of rock andcountry that Bonnie Raitt did so well. There are even vocal similarities between the two artists.  Bell is her own creation, however, and flitsfrom genre to genre as she sees fit.  Herlyrics are positive and pragmatic, working to build rather than to teardown.  She gets things rolling nicely on The Italian Project with “Bring The Love”,a meat and potatoes mash of rock, blues and country that is very catchy.  This is one of those moments where you can’thelp but compare Bell to Raitt.  “Come MyWay” has a wonderfully variegated guitar part that adds nice texture to thesong.  This is eminently radio ready,with a memorable pop chorus you won’t escape.
Bell goes for a late 70’s/early 80’s soul sound on “OneFace, One Race”, and includes some backing vocals sung in Italian.  Whether in English or Italian the message isclear; we are all one.  “A Brighter Day”allows Bell to show off her dulcet alto over a light samba that she wear verywell.  “Walk With Me” is a love song,displayed in a catchy, blues/rock arrangement. There’s a distinct sensuality here in Bell’s voice, but it seems more ofa natural element than an affectation.  Bell’s "Love Hurts” pays homage to the Nazareth tune of the same name, but is otherwise original.   She imbues the song with an energy and spunk that make it thoroughly enjoyable.
With “Quilt”, Bell returns to the theme of people beinguniversally connected.  The allegory forfinding a way to bind us all together will not be lost on the listener, andBell manages to protect a maternal air in the process.    Bell’s only stumble is “From The OutsideLooking In”, which just doesn’t seem to have the energy of the rest of thealbum.  The song is essentially its ownallegory.  “The Best Of Me” is a solidcountry anthem about making the most of your dreams.  It’s a great message, and Bell is in her bestvoice here.  “I Can Be Anything” followsin much the same theme.  The words hereborder on cliché, but Bell pulls it off with panache a genuine belief in whatshe has to say.  The Italian Project closes with “Set It Free (The Boomba BoombaSong), which seems to be a sort of children’s tune with a Caribbean feel.  It’s a fun little closer that’s more noveltythan anything else, but works to show a lighter side to Lisa Bell’s creativetalents.
Lisa Bell crafts eleven original and empowering songs on The Italian Project.Bell’s positive focus is a breath of fresh air, and her blends of rock, countryand blues are aurally appealing.  Bellwill be compared to Bonnie Raitt extensively, and it’s not an unfair simile,but Bell is very much her own artist who just happens to share some traits withone of the greats.  Listen to The Italian Project and you’ll behooked.  Lisa Bell is the real deal.
Rating:  4 Stars (Out of 5)
Learn more at www.lisabellmusic.com
Posted by Wildy at 6:00 AM