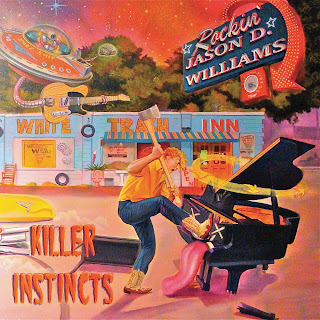 Jason D. Williams - Killer Instincts
2010, Rockabilly Records
Jason D. Williams has been making hit records out of other people's songs for fifteen years.  Going into the studio with producer Todd Snider in early 2010, Williams was initially content with the same old approach.  When he and Snider got together something magical happened.  Snider was so impressed with Williams' ability to create spontaneous songs and poetry that this ability became the central focus of their time together.  It wasn't long before the covers were out the window and an album of nearly-improvised original work was in the works.  Joined by The Georgia Satellites' Dan Baird and Keith Christopher, Jason D. Williams has turned out the most inspired work of his career.  The resulting album, Killer Instincts, drops on October 26, 2010.
Whoever knew Jason D. Williams would sound like Lyle Lovett with a mean streak?  Williams touches on early rock n roll, rockabilly, rhythm and blues and gospel in one of the most surprising and original releases of the year.  Killer Instincts opens with "Just Like Jerry Lee", casting aspersions on rumors about Williams' being Jerry Lee's son.  It's a humorous rhythm and blues/early rock turn that plays off of Lewis' signature piano style.  "Big Red Green One" was inspired by a random phrase written on tape in the studio and finds reality and fantasy blending in Williams' off-center recounting of his touring life.  It's great songwriting that plays on the edge of madness, taunting the tendrils of insanity with each leap and bound.  "If You Ever Saw A Baby With It's Pud" was written on a dare from Snider that challenged Williams to write entirely freestyle (like in rap music).  The tune is fragmented and funny, mixing irreverence and respect in head-spinning fashion.
"You Look Like I Could Use A Drink" is snarky and fun; an entertaining and danceable bit of rowdy, barrelhouse rock n roll.  "Wine Spo-Dee-O-Dee" is a drinking tune done in an old-school rock n roll style that's perfect for last call.  "Daddy's Lil Punkin" is a cute riff on a dysfunctional father-daughter relationship that leads into the entertaining caricature "White Trash Wife".  Williams slips into his boogie-woogie shoes for "What Am I Gonna Do", a love song that will have you wishing you knew how to jitterbug.  It's a great tune, virulently catchy and certain to get stuck in your noggin.  "Really Really Pretty" is pure braggadocio, with Williams mooning/boasting over his girlfriend.
"Sanctified" blends gospel and rock, a crazy song of irreverent reverence with a classic-style call-and-response chorus.  It's highly entertaining and very above-board on the face, but there's a rebellious undertone here that becomes more glaring on "Mr. Jesus".  Here Williams offers an irreverent-bordering-on-blasphemous prayer from a sinner who is down to his last straw.  Williams takes listeners on a neo-classical excursion on "Yes I Can", an inspiring and magical solo-piano rant that will remind you (in case you forgot) just how talented the man is on the keys.  Killer Instincts closes with "To Hell With You", a love song to drinking buddies and reminder that the road to depravity is a slippery slope best enjoyed with friends.  It's a great closer, certain to be repeated at bars and clubs all over the map.
John Steinbeck said "the best laid plans of mice and man sometimes run amok"; sometimes it's these moments that create the greatest flashes of inspiration and magic.  Jason D. Williams proves the point on Killer Instincts, his most impressive and noteworthy album to date.   In spite of the novel approach and Williams ever-present sense of irony, Killer Instincts is anything but a novelty record.  This is rock n roll, raw and pure, with the energy that early purveyors of the genre found and a modern irreverence and sensibility that thumbs its nose in the face of expectations.  Williams mixes up styles, sounds and expectations with Killer Instincts, but in the process, at least for a short time, Jason D. Williams is rock and roll.  Killer Instincts is a Wildy's World Certified Desert Island Disc.
Rating: 5 Stars (Out of 5)
Learn more about Jason D. Williams at http://www.rockinjasondwilliams.com/ or www.myspace.com/rockinjdw.  Killer Instincts drops October 26, 2010.  You can-preorder the CD from Amazon.com.