Framing Hanley - A Promise To Burn 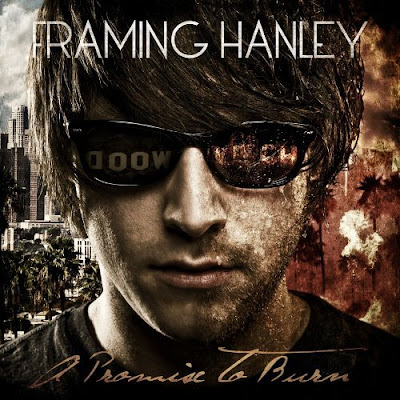 Framing Hanley returns with their 2nd album today, A Promise To Burn; showing flashes of brilliance, but staying mostly mired in pre-processed, radio-ready modern rock. The Nashville-based band who gained their initial notoriety via MySpace continues to expand upon the sound they unleashed on 2007’s The Moment. Opening with "The Promise", Framing Hanley sounds a bit cliché, but scores points with a big, catchy rock chorus. Its decent radio fare but not a standout. "Wake Up" is an urgent pop/rocker with a chorus built around a killer hook. Moving from this dynamic moment into "Bittersweet Sundown", Framing Hanley pushes through a bland rocker that foretells the next few songs.

"Weight Of The World" turns the tide with a pared-back 1980's rock sound that is very becoming to the band. Framing Hanley strips back some of the guitar sound and finds a low-key approach that allows the simple melody to shine. Kenneth Nixon offers up his best vocals on the disc, and "Weight Of The World" sounds like a hit in most any era. On "Fool With Dreams", Framing Hanley moves into the sensitive power ballad with a somewhat cliché but likely popular tune. "Back To Go Again" turns out to the centerpiece of A Promise To Burn, featuring one of those choruses that get lodged in your brain. This is the catchiest tune on the disc; a missive on a relationship that is falling apart and the desire to hit reset before it crashes. "Livin' So Divine" is a solid active-rock tune with mild commercial potential but not a lot of heart. And so goes the rest of A Promise To Burn, right through the closing track, "The Burn".

Framing Hanley has a big rock sound that is a bit too typical to really stand out. There is a distinct musicality at the heart of the songwriting on A Promise To Burn, but this often gets buried inside the commercial intent that drives the album. Framing Hanley's best moments come when they shake off the commercial chains and write pure pop/rock songs. As a whole, A Promise To Burn is a decent effort with a couple of great moments. It's likely to satisfying existing fans but isn't a strong catalyst for new ones.