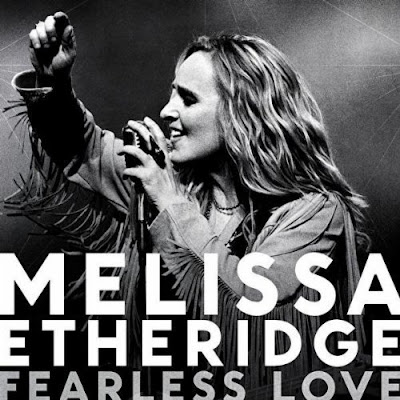 Future Rock N Roll Hall Of Famer Melissa Etheridge returned on April 27, 2010 with her eleventh album, Fearless Love. Fearless Love opens with the title track, a classic rock n roll love song seeking that perfect union. The song has a solid chorus that will bear it well on commercial radio. "The Wanting Of You" is a song about sometimes the heart takes side trips that our best intentions would never suffer. It's a great rock tune. I know Etheridge is a big Springsteen fan, and these first two songs have the same rough-and-tumble, every-person story-teller tone of The Boss' best work. "Company" may not sound too impressive on the first listen, but it has one of those sneaky choruses that keep popping up on you.

On "Miss California", Etheridge takes on former Miss California Carrie Prejean, Proposition 8 and the right to be who we are in a snarky blues-rock tune with guitar work reminiscent of Jimmy Page; there's even hints of an old belief about homophobia and its relationship to latent homosexuality. It's an entertaining number done up in big guitars, with a wink and a smile; the attacked responding from a place of self-assurance against a discomfited aggressor. "Drag Me Away" is lighter fare, a great rock n roll romp that's part Janis and part Bruce. Etheridge shows off her story-teller skills on "Indiana", a biographical sketch who’s born into a world that will never be hers but manages to make a place for herself. It's a great tune with a positive message.

Etheridge gets back to the raw roots of rock roll with "Nervous", a song about sexual tension and little else. It's Etheridge at her sexy best, reveling in the pure emotional high of the moment. "Heaven On Earth" captures the magic of a 1980's power ballad in a pure love song that's mostly altruistic. On "We Are The Ones", Etheridge draws from the Alice Walker (The Color Purple) poem a theme that was co-opted by Barak Obama's campaign in 2008. It's a solid tune. A bit repetitive perhaps, but with a positive message about the interconnectedness of all peoples and our ability to make each other’s lives better. Etheridge shows her softer side on "Only Love" and "To Be Loved"; two decent songs that just don't live up to the rest of "Fearless Love" but also do no harm. She's saved her best for last, however. "Gently We Row" is a song about finding meaning in the world, and the need for each of us to find our own way. Etheridge has always been at her best when she writes from the heart, and lyrical offerings of "Gently We Row" are among her best work to date: "I wrapped my round my own daughter / as she fell into her place in time / and as her mind creates her illusions / I won't complicate hers with mine".

After hearing some of Melissa Etheridge's more recent work, I wasn't really expecting a lot out of Fearless Love, but this album is something of a renaissance for Etheridge. Her songwriting hasn't sounded this crisp since her Yes I Am days. And if the brashness of youth has been replaced by the wisdom and assurance of maturity, Etheridge shows she can still mix it up on the sidelines with some serious rock n roll. Lyrically, Etheridge is doing her best work right now, and Fearless Love is proof that Etheridge belongs in the discussion of the best songwriters of her generation.

Rating: 4.5 Stars (Out of 5)
Learn more about Melissa Etheridge at http://www.melissaetheridge.com/ or www.myspace.com/melissaetheridge. Fearless Love is available both on CD and digitally from Amazon.com. Digital copies are also available through iTunes.
Posted by Wildy at 5:10 AM

Here, I do not really consider it will work.