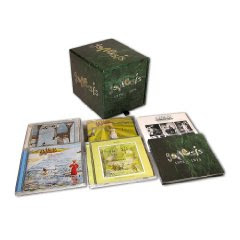 There are few bands in rock and roll that can create the sort of excitement Genesis can. Even 40 years after their founding, with multiple personnel changes and layoffs in between, Genesis tours and tickets evaporate into thin air. With over 150 million records sold worldwide, Genesis is one of the top thirty all time selling bands. Their material is as diverse and eccentric as you could imagine. Atlantic/Rhino has released a collection of five original studio albums under the title 1970-1975 containing 7 CDs and 6 DVDs, along with a bonus disc of unreleased material. It's a large scale re-packaging with includes remastering/remixing of the original stereo recordings on CD and then 5.1 Surround remixes on DVD. Also included is a disc of rarities not available elsewhere.

The albums involved are Trespass, Nursery Cryme, Foxtrot, Selling England By The Pound, and The Lamb Lies Down On Broadway. These albums mark the Peter Gabriel era of Genesis. Fans will argue about whether they prefer Gabriel or Phil Collins (with the occasional Ray Wilson sympathy vote), but no one denies that Gabriel was at the helm during Genesis' more experimental Progressive Rock years. Genesis was sometimes derided, particularly in Britain for musical elitism, purveying progressive art rock in the era when Punk Rock came alive. The stealing away of music from the working class was a common theme amongst critics, most of whom are long forgotten.

1970-1975 is your basic repackage. A few unreleased/live tracks are thrown in to make it worthwhile for hardcore fans, but that's your audience. The big price tag ($139.98) won't appeal to anyone else, particular in an economic environment like the one we are in now. While all of the albums here are great, start with something like The Lamb Lies Down On Broadway or Selling England By The Pound and then work your way backwards. If you're a die-hard and you have the extra cash this holiday season, then you'll be happy with 1970-1975. The set looks great and the sound is fantastic.

You can learn more about Genesis at http://www.genesis-music.com/. You can purchase 1970-1975 at Amazon.com or most major music retailers.
Posted by Wildy at 5:05 AM