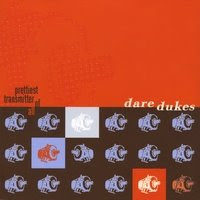 The best performers have at least some musical talent, a voice that is pleasant or interesting to listen to, great material and the ability to inhabit a song, soliloquy or role that transcends the stage or theater and calls us back to life through the performer/character's eyes. Many performers can do one or two of these things, but the transcendence of time and place is a magical talent that can not be taught or learned. Some people have it and the rest spend their lives struggling to figure it out. Meet Dare Dukes, a singer/songwriter based in Savannah, GA who plays and sings with the best of them, writes incredible songs, and brings characters, time and place to life so thoroughly through his songs you might forget even for a few minutes that it's a performance. The only other musician I've ever heard who could capture the brutal beauty of humanity in song in such precise tones is Randy Newman. Dukes' album, Prettiest Transmitter Of All is a series of aural portraits and soliloquys that capture restless souls, lost and misguided moments and the innate beauty and renewal of day to day life. It's stunning.

Prettiest Transmitter Of All opens with the Ballad Of Darius McCollum, a biography of the legendary New York City resident. McCollum, who suffers from Asperger's Syndrome, has been arrested numerous times over the years for attempting to steal trains or gain access off-limits portions of the New York City Subway system by posing as an employee or contract. The song depicts a man who loves trains, pure and simple. McCollum had memorized the system by the age of five and has posed as a NYCTA employee on numerous occasions (Interestingly enough the public's experience with McCollum posing as an employee has resulted in a much higher level of rider satisfaction than in dealing with actual NYCTA employees). Dukes has created a daring and apt musical picture that is part ode and part biograph.

Kick + Holler is a gorgeous composition built around acoustic guitar and strings. Lyrically Kick + Holler is a highly intelligent look at the human capacity to react badly to adverse situations. The melody is memorable and the song becomes something greater than the sum of its parts. Sam's Cathedral escaped me somewhat in that I apparently don't enough of the back story to get the context, but the composition here is ingenious. Dukes strips it down to just him and acoustic guitar until about halfway through. The rhythms he creates with just the guitar carry the song.

Lucas Goes To The Demolition Derby is a melancholy composition that is beautifully orchestrated. The title is a bitterly ironic as a metaphor for the inexperience and ineptness of young drivers. Dukes speaks on different levels to different listeners, depending on how deeply you listen. The ability to do just that through any medium is a profound gift, and Dukes uses it to full effect here. Bakersfield has a vaguely Michael Stipe feel to it, although it's not really Dukes' style to sound like anyone other than himself. Bakersfield highlights the human willingness at times to put ourselves into bad situations to recover something we've lost. From A Plane is a pretty little pop confection dressed up in acoustic and electric guitars, flutes and Dukes' enigmatic voice. The album closes with The Equipment Is Fine, a twisted look at people coping day-to-day with the darker aspects of humanity.

Dare Dukes is an abstract painter of human experience using the media of guitar and voice. He's found a voice in which he can frame various aspects of the human condition for others to view/hear. Dukes' viewpoint is perhaps not unique, but unusual enough to captivate the imagination. His ability to couch big ideas in small phrases and metaphors makes for a highly entertaining and thoughtful listen. His musical compositions are complex and unique and entirely fitting to the subject matter at hand. Prettiest Transmitter Of All is the output of a true American Primitive artist. His genius isn't so much in technique or in history but in the ability to tell you stories you already know from a perspective you've never considered. The fact that he does it so well is a bonus. Prettiest Transmitter Of All is a Certified Wildy's World Desert Island Disc. This is a unique and unusual gem folks. Don't pass it by.

You can learn more about Dare Dukes at http://www.daredukes.com/ or www.myspace.com/daredukes. You can pick up a copy of Prettiest Transmitter Of All at www.cdbaby.com/cd/daredukes, or you can download it from iTunes.
Posted by Wildy at 5:10 AM