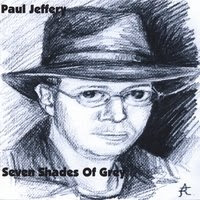 Paul Jeffery is a West Yorkshire, England based singer/songwriter who is known for his intensity onstage. The man literally is booked all the time. He's played for rooms in the single digits as well as for crowds in the tends of thousands, and he pours his heart into every single show. Jeffery is described as a musician's musician. With influences ranging from Springsteen to the Beatles, Jeffery has a distinct appreciation, and a talent, for songwriting, conveying ideas through music, and showmanship. His latest effort, Seven Shades Of Grey reinforces all that Britons know about Jeffery from his twenty-one years onstage there.

To put Paul Jeffery into terms that readers in the Western Hemisphere might understand, he sounds quite a lot like an intense Don Henley. That’s the first impression Jeffery makes. As you listen more closely and sink into the nuances of his voice, the Henley resemblance fades some, but not entirely. Paul Jefferey writes powerful pop songs full of emotional edge and distance. Money From The Satisfied Man fits into this category nicely, built from a wicked guitar riff and layered in piano, bass and drums. Gods And Angels is very powerfully written, primarily just Jeffery and piano. Paul Jeffery squeezes every ounce of vocal drama possible out of this song without it sounding like affectation.

Another strongly moving song here is Whatever Happened To Laura Jones. This is a prime example of the songwriting talent displayed by Paul Jeffery. This is the sort of song that just doesn’t get written anymore. There aren’t many artists with the right combination of musical talent and gravitas as a performer that can pull of this kind of story song. Other highlights include Through Heartache And Back, Seven Shades Of Grey and The Prisoner.

Paul Jeffery is relatively unknown outside of England, which is further proof that we do not live in a perfect world. Jeffery is the sort of talent who should be lighting up stages around the world. His mix of songwriting depth, pop sensibilities and intense yet easy song delivery make for a definite winning combination. Seven Shades Of Grey is definitely worth a listen.
Rating: 4 Stars (Out of 5)

You can learn more about Paul Jeffery at www.myspace.com/pauljefferymusic or http://www.pauljeffery.com/. You can purchase a copy of Seven Shades Of Grey at www.cdbaby.com/cd/pauljeffery2.
Posted by Wildy at 5:14 AM