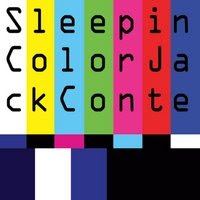 San Francisco’s Jack Conte is either on the edge of the next wave of popular music or an eclectic, one of a kind phenomenon. Conte is one of the pioneers of VideoSongs, a mash up of live performance and music video that has become something of a tour-de-force on sites such as YouTube. Conte has two VideoSongs on YouTube that have combined for 1.3 million views. One is a mashup of Radiohead and Chopin, the other a mashup of Aphex Twin and Bright Eyes. There's no lip-synching or pretending to play over tracks. The sound is live and verifiable, the format unique to ever developing capabilities of the World Wide Web, and Conte is at the forefront. Building on this wave of excitement, Conte will release a new EP in January of 2009 entitled Sleep In Color. Sleep In Color is built from a marriage of classic instruments with modern sounds. Electronic/organic creations utilized synthesizers in addition to a World War II era accordion, an upright piano from the gold rush days, a glockenspiel, a '72 Wurlitzer Organ, a '74 Hammond Organ, drums and analog guitar effects. You have to hear this to believe it.

Conte appears to be taking pop songwriting and working it to the point of sonic/cognitive dissonance. Hollywood Endings starts out as a down-tempo pop piece with a strangely drawing melody built in minor keys. Conte’s voice is enigmatic and strange and very interesting to listen to, but all of the production and effects built around what is essentially a solid pop/rock composition become messy and hard to listen through. Likewise Like A Match. The song is a competent one, but gets lost in all of the layers here. The biggest saving grace here is the U2-like chorus. The Greatest Hoax moves more towards a pure electronica composition but still overdoes itself with effects, beats and layers. Now That’s Sacred is perhaps the most stripped down of the songs on Sleep In Color. The same general tendency to overdo is here, but has been scaled back some to allow what is a really pleasant melody shine through. Sleep In Color closes out with Carousel Waltz, which ends up sounding like a carousel in a scary funhouse. The perspective is warped just enough to make something comfortable and safe into something you’re not sure of.

Jack Conte appears to be a talented composer/musician. My sense is that there is a tendency for Conte to want to do too much to the songs he envisions. This creates finished products that are overdone or become harder to hear for all of the embellishments. Sleep In Color has a couple of bright moments, and shows real promise as a writer. You can’t be faulted for trying too hard.