Corey Crowder - Gold And The Sand 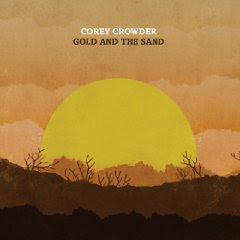 Corey Crowder gets to the heart of the matter pretty quickly. Not one for guilded metaphors or shadowed imagery, Crowder breaks down the truth and beauty of small details in no uncertain terms, supported by melodies that make the ideas soar into you like light into the ground at the end of a rainbow. His latest CD, Gold And The Sand, is a raw, emotional affair that may shock listeners with it's unconstrained voice, but listeners will ultimately be glad they made the effort to listen.

Crowder sets the tone from the first notes of Southern Way with his big soulful voice. The song is a blues/rock/country hybrid with serious commercial potential and perhaps even that crossover chic that could place it both in modern rock and country circles. Love is a big anthem that’s part Edwin McCain and part Garth Brooks. Crowder seems to be able to center in on themes and sounds that have been done many times before; yet makes them his own rather than falling into cliché. Higher Ground is a dark bluegrass tune that is a first cousin to the blues and will rivet you.

Be sure to check out Leaving You, the sort of melancholy love song that has made Nashville what it is today. Likewise Helpless Heart, which is a big country/pop tune pull of good old fashioned pedal steel and some very modern layering to create a big, big sound. The song is full of soul and passion and is a must-listen. Crowder moves back into the blues/rock realm with Innocence, which has an almost 1970’s soul air to it. Other highlights include Changes, the honky-tonk Devils, I’ve Become Something and Lonesome Road.

Corey Crowder has this great, dynamic mix of sounds and styles that he’s interwoven into his own signature sound. The mix of soul, blues, country and rock creates the sort of giant cross-over potential that should have music marketers salivating into their giblets. Aside from being labeled as a product by the industry, Crowder can write and sing. Expect to hear a lot more of Crowder over the next decade or three. If there’s justice in the music business then this guy is really on his way to somewhere. Gold And The Sand is the sort of album that could launch him into the music world’s stratosphere.

You can learn more about Corey Crowder at http://www.coreycrowder.net/. You can pick up a copy of Gold And The Sand at Amazon.com or wherever music is sold!