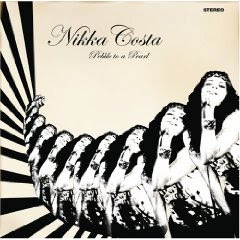 It might be fair to say Nikka Costa has led a charmed life. Growing up as the daughter of legendary producer Don Costa and God-Daughter of none other than Frank Sinatra, Costa was opening for headline entertainers at the age of 5 and at the age of 7 electrified a crowd of 300,000 in Chile. Costa spent her teens back and forth between Los Angeles and Europe while developing her career and rubbing elbows with the likes of Quincy Jones, Sly Stone and Sammy Davis, Jr. at her father’s studio. Costa has had a long and successful recording career, and now returns to the fore with her latest release, Pebble To A Pearl.

Pebble To A Pearl is a step away from the pure sugar/dance pop that pervades much of R&B these days, and looks to the roots of the genre. Nikka Costa plumbs blues, jazz and classic R&B sounds to create a sound that is both reassuringly familiar and strikingly on the edge. The album opens with Stuck To You, a classic bit of funk/soul that will have you dancing right from the get-go. Pebble To A Pearl is pure funk, with a beat you won’t be able to resist. Someone For Everyone is a sweet soul ballad with gospel accents. Other highlights include the funkafied Cry Baby, the highly danceable Keep Wanting More, Loving You and Bullets In The Sky.

Nikka Costa charms throughout Pebble To A Pearl with a mix of searing funk and soul influenced rock and roll, her fiery personality and electric voice. As time goes on it becomes more and more apparent that Costa is incredibly talented, and likely well on her way to being an icon of the music business. Pebble To A Pearl is a plateau, but don’t expect it to be the peak. Just when you think she can’t get any better she pulls out a performance like this.
Rating: 5 Stars (Out of 5)

You can learn more about Nikka Costa at http://www.nikkacosta.com/. You can purchase copies of Pebble To A Pearl at Amazon.com or wherever music is sold.
Posted by Wildy at 5:00 AM