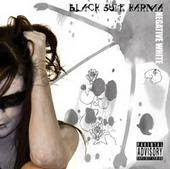 Conway, Arkansas' Black Suit Karma come looking for a fight. The tough and opinionated band don't heel well to their Red State roots. They also don't adhere to the DIY concept of killing themselves on the road. The band just came into full force in April of 2008; by July they were in the studio. Their debut CD, Negative White, combines Sabbath-style rockers with introspective, dark metal sensitivities, and announces to the world that Black Suit Karma is ready to rock.

Black Suit Karma hasn’t gone the traditional route of significant gigging together to build a buzz. Comprised of vocalist Norman Wilkerson, guitarist Tommy Johnson, bassist Rus and drummer Jeremy Parker, Black Suit Karma feel they’ve hit upon a unique convergence of people and talent and are destined to take the rock/metal world by storm. While the jury’s still out on the end result, there is no doubt there is a certain chemistry running through Negative White. Agony Of Solitude comes off the rails with a pulsing energy you have to hear to believe. Omega Horse has a sort of dark, brooding charm that won’t quite go away. Mosh, Fight Or F### is pure punk rock in metallic clothing. The class of the album is Lovers Or Leeches, which is both dark and fitting but also wildly commercial.

Black Suit Karma is a potentially explosive band. They do seem to get caught up in an alt-rock melancholy at times that seems to perhaps slow them down, but this may be more stylistic choice than deficit. Negative White should appeal to fans of later Metallica, Alice In Chains, Rob Zombie and the Misfits. While Negative White on the whole is not a purely commercial album, there are enough commercial earmarks here to push sales, and enough rock/metal credibility to establish Black Suit Karma as a force to be reckoned with.

Rating: 3 Stars (Out of 5)
You can learn more about Black Suit Karma at www.myspace.com/blacksuitkarma, where you can purchase a copy of Negative White.
Posted by Wildy at 6:37 AM