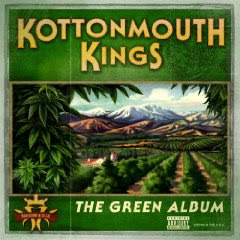 Kottonmouth Kings are revolutionaries in Indie Music. Don’t like the major labels? Start your own! How about your own clothing company. Put out ten albums over a nine year period while producing/releasing albums for as many as 20 other acts. Tour constantly. Is there time enough in the day? The Kottonmouth Kings have made the time. Along the way they’ve continued to make groundbreaking music that fuses rock, hip-hop and classic soul vibes. Their latest, The Green Album, continues in this vein.

Blaze Of Glory lyrically celebrates action and change yet is mired in a depressive and meandering arrangement. The rap celebrates overcoming a difficult start to life and yet is stuck in Sad-Sack Terziak mode. Rock Like Us turns the page with a more upbeat bit of musical trash-talk. The musical wrapping here is more sonic dissonance than support, but works for the dance club set. Trippin' has something to it that is memorable, capturing some of the energy that Kottonmouth Kings are capable of. Where I'm Goin' has a bit of a ballad feel to it, sounding much more mainstream than much of the material on The Green Album.

Be sure to check out Stand, which desperately wants to be an Americana tune. The chord progressions and lyrics suggest a much different arrangement lives on in this song with significant commercial potential. Freeworld is another song that wants to cross over into the pop/rock realm. Brother J grabs the mic on Freeworld to good effect, but this is another case where another arrangement suggests itself as a distinct possibility. Other highlights include What U In 4, Rainfall, Grass Is Greener and Plant A Seed.

Kottonmouth Kings have songwriting talent that wants, at times, to break out of the hip-hop pond they play in. Several songs here are potential pop/rock hits with the right arrangement. Stand in particular wants to express itself in a different way and just might make a huge hit for the artist who hears that other arrangement and helps it escape. The Green Album is definitely not recommended for the under-18 set, as most parents would not appreciate the constant drug references, but all in all it's a pretty decent album. I was pleasantly surprised.

You can learn more about Kottonmouth Kings at http://www.kottonmouthkings.com/. You can purchase a copy of The Green Album at Amazon.com or wherever music is sold.
Posted by Wildy at 6:51 AM