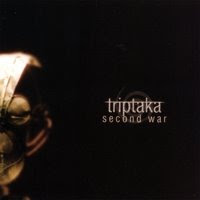 Triptaka is from Seattle but has it's roots in Ontario, Canada. Graeme Cornies, Dave Kelly and James Chapple have spent significant time writing music for corporate America, but find their greatest challenge and satisfaction creating their own brand of industrial alternative rock music as Triptaka. Their debut album, Second War, is a theme album about humanity fighting to keep it's better instincts intact. The theme runs through both humanist and religious philosophies, with descriptions as stark as "spiritual war" or as benign as "selling out". Triptaka certainly doesn't sell out on Second War, a surprisingly supple (for Industrial music) album full of a positive message bigger than itself.

Triptaka sounds like an odd conjugation of the Dave Matthews Band and Nine Inch Nails. Lead vocalist Graeme Cornies sounds quite a bit like Dave Matthews on the opening track, Suspended, but there's a definite harder edge that runs throughout Second War. The title track is in the style of early Metallica, whereas Tamed takes a much more pop/dance flavor into the heavy drum and bass mix. Mother is a more organic, acoustic based sound that is pleasant to the ears but retains a lot of the repressed energy that runs throughout the album. The Source heads for more ambient musical currents, sounding more like the bizarre dream born of a meditation gone haywire. Falling Down returns to the heavy metal pretense with a song that rocks harder than most of the hard edge bands on the market these days. Second War closes with Don't You Think It's Time You Let Go?; a melancholy ambient number that has licensing written all over it.

Triptaka takes risks on Second War. Some work and some don't. What comes across more than anything is the courage to create in any direction that takes Triptaka's fantasy, regardless of the market at hand. This is why I think in the long run Triptaka will succeed in the music business. The courage and ability to create for and from one's own muse in the face of commercial pressures marks the sort of character and lasting confidence that tends to carry a mediocre band to success, and a good band like Triptaka to maybe be a great one. Only time will tell, but Second War is a good start.

You can learn more about Triptaka at http://www.triptaka.com/ or www.myspace.com/triptaka. You can purchase a copy of Second War at www.cdbaby.com/cd/triptaka.