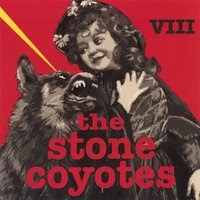 The Stone Coyotes are the sort of rock and roll trio that starts parties wherever they play. The Stone Coytes' brand of unpretentious rock revs you up and allows you to let go of the world for an hour or two while they inspire you with stories that transcend music and the human experience. Barbara Keith stands in on lead vocals and guitar. Her husband Doug Tibbles bangs the drums and stepson John Tibbles slaps the bass. This is a family outfit without an ounce of Hollywood veneer. (The family/band actually moved from LA to Western Massachusetts to get away from the Hollywood hype machine). The Stone Coyotes released their eighth album in 2008, aptly entitled VIII. If there's a more pure strain of rock and roll out there anywhere right now I'd love to find it.

Barbara Keith started out performing at Cafe Wha? in Greenwich Village, where the likes of Jimi Hendrix and Bill Cosby started out. Her self-titled debut in 1972 was a success and she recorded for MGM/Verse, A&M and Warner Brothers before taking herself out of the major label game. Along the way she wrote songs that have been covered by folks such as Tanya Tucker, Streisand, Melanie, Hank Snow and Lowell George. Her song The Bramble And The Rose is a folk classic. Doug Tibbles was a Hollywood writer, contributing to shows such as The Munsters, Bewitched, Andy Griffith and Love American Style. After his first day of editing for Happy Days Tibbles quit and went DIY with his wife, Barbara. Moving out east meant recording in their basement and writing songs at their own speed in the relaxed atmosphere of the Berkshires. A series of outstanding rock and roll albums with the occasional bit of country tartness has ensued.

VIII is no exception. Tomorrow Is Another Day opens the set sounding like something right of early 1980's FM radio (I found myself thinking of Is She Really Going Out With Him? throughout this song). Barbara Keith is in fine vocal form here, and the song will keep your toes tapping. Not Right Now has an acrid Blues-Rock feel to it that sounds like a stripped down AC/DC tune. The Lights Of Home is more of a country ballad with real heart and some excellent harmony work. Be sure to check out Trouble Down In Texas, a barrelhouse country rocker full of blues and beer and country attitude.

Brand New Car shows a funky side to Barbara Keith and The Stone Coyotes that is a pleasant surprise. A Charmed Life returns to a more straightforward Rock tune. Again there is this inescapable feel that a stripped down AC/DC motif is at work here. You could hear Angus Young screaming his way through this song quite easily if he were still with us. If I Knew How To Dance has a Ramones-like energy to it, wrapped up in a tune that still hasn't decided if it's a country-rocker or a punk anthem. Make sure to also check Kern River and The Grey Robe Of The Rain. The latter is the deepest and most artful song on the album, an exclamation point on a primo performance.
The Stone Coyotes know how to make rock and roll. They know how to tell a story and wrap it in the fine coat of musical magic. VIII is a standout album that should continue to add to their credibility amongst fans and win them new ones. There are several members of the rock and roll hall of fame who would listen to this album and if, being honest, state "We're not worthy". VIII is a Wildy's World Certified Desert Island Disc, a flash of genius, and what they heck are you doing still reading this? Go buy it!
Rating: 5 Stars (Out of 5)

You can learn more about The Stone Coyotes at http://www.stonecoyotes.com/. You can purchase a copy of VIII through their website using PayPal, or you can pick it up at www.cdbaby.com/cd/stonecoyotes9.
Posted by Wildy at 5:10 AM