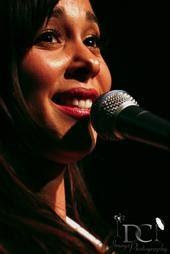 Amber Ojeda is a singer and actress from San Diego, CA with a penchant for combining old school jazz styles with hip-hop and urban grooves. Her music has been featured on the TV show Dress My Nest, and on feature films All That I Need and Prayer Before Murder. Ojeda has a recurring role on Veronica Mars and has also had face time on Dress My Nest and promos for Starz TV. Ojeda submitted her self-titled demo for review.

The demo opens with So Lovely, a bare-bones urban groove designed to display Ojeda's dusky alto voice. The verses here are monochromatic and somewhat forgettable. Ojeda has a pleasant sound but plays very much to style here, almost constricting her voice to fit a certain mold rather than letting it range free. The listener gets the impression there is more there to be heard. Don't Rush continues in the slow jam vein, moving more into straightforward modern R&B with some neat jazz style piano underneath. Hype Love works the jazz base into a hip-hop arrangement that really is nothing more than something to sing over. The difficulty here is that the music is so generic that you could sing almost anything over it, as if these tracks could have been purchased from a producer who had nothing to do with the project. It's not so much song craft as karaoke. Very good karaoke, but karaoke nonetheless. Hype Love is something of a woo-girl song. It doesn't mean a lot to those who aren't on the inside of it, but would probably do well in the club scene.
Get To Know Me slows things down a bit and allows Ojeda to stretch somewhat. Here we get to see Ojeda at her most stripped down vocally. At its most basic presentation Ojeda's voice isn't perfect, but is full of sufficient color and texture to be enjoyable to listen to. Get To Know Me suffers from a lack of energy that shows up at times throughout the demo and never really establishes a memorable melody or hook. Love From The Band has a pop/R&B feel that approaches Sade type material and is the best track on Amber Ojeda. Here I Am plays with more tension than any of the other songs here, capturing some of the energy of the jazz foundation. Some unfortunate effects are used that provide a Chipmunk-like peripheral vocal are present here and detract somewhat from what is a capable melody and a strong performance from Ojeda. The closing track, Approaching You is the most commercial track on the demo, and might make some small waves on urban stations if push as a single.
All in all, Amber Ojeda has a good start. She has a pleasant, dusky R&B vocal style that should serve her well, although there are a lot of folks in the market in the same style that are more dynamic and more likely to get noticed first. The blending of pop/R&B with jazz is nice, but is more like placing puzzle pieces together than truly blending styles to create something unique. The arrangements here are very generic. Ideal for a producer's workload but not ideal for an artist trying to differentiate herself in the market. Amber Ojeda has potential. Her demo has some high points that are worth hearing but otherwise is too formulaic to really stand out.
Rating: 2.5 Stars (Out of 5)

You can learn more about Amber Ojeda at www.myspace.com/amberojeda. If you ask really nicely maybe she’ll sell you a copy of her demo!
Posted by Wildy at 12:48 AM