Review: MC Envy - Do Not Approach These People 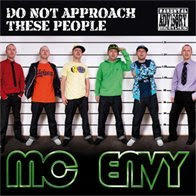 MC Envy - Do Not Approach These People
2009, NVP Records

London's MC Envy is breaking down barriers in hip-hop and R&B. The classically trained pianist includes live piano in his recordings and live shows as a foil to reliance on R&B beats and hip-hop/rap themes. MC Envy is a 22-year old up-and-comer riding the wave of popularity of home-grown hip-hop in the UK. MC Envy has been featured on the main stage at London Pride in Trafalgar Square as well as other Pride events in England. He's also begun producing for rapper Bigg Nugg and vocalist Kelly Mantle (Hollywood, CA). MC Envy's debut album, Do Not Approach These People was released in August of 2008 on his own NVP Records label.

The marriage of classical piano and hip hop was bound to make an appearance sooner or later, as sooner or later every genre-to-genre mix will be attempted, lauded, argued over, disparaged and eventually deposited in the $1.99 bin after a longer or shorter period of haut-couture preference. MC Envy uses his classical piano skills to illuminate his own brand of hip-hop/rap/soul music on Do Not Approach These People. The album opens with Please Don't Cry, built around a handful of piano arpeggios stitched together in something like a hook. MC Envy is capable with a rhyme and pleasant as a vocalist. I Am What I Am sounds almost baroque at its opening before devolving into a straightforward hip-hop tune.

I highly recommend Man In The Mirror, which is built around a somewhat more intricate piano part than heard thus far on Do Not Approach These People. The song itself is lyrically powerful and definitely worth some attention. Don't Wanna Mess continues with the genre-bending tendencies, opening with what sounds like an electric violin. One Life is the potential major dance hit here and would likely make major headway on the club scene. Also notable are Coming Out and Dance With Me.

MC Envy is riding the wave of popularity that hip-hop currently enjoys in the United Kingdom. His music is highly commercial in sound, intelligent in rhyme and bound to get (and keep) your feet moving. Do Not Approach These People is a serious attempt at fun. You'll dig it.

You can learn more about MC Envy at www.myspace.com/mcenvylondon or http://www.mcenvy.co.uk/, where you can purchase a copy of Do Not Approach These People.
Posted by Wildy at 5:00 AM