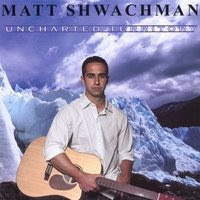 Boston’s Matt Schwachman has been getting heard a lot lately. From CMJ coverage to pickup on 125+ college radio stations to a song placement on One Tree Hill, Schwachman has been making his way around pop culture. Schwachman’s latest album, Uncharted Territory is acoustic pop/rock in the same category as John Mayer or perhaps even Jason Mraz! Schwachman is burning up the travel corridors of the Northeast US trying to promote Uncharted Territory. Here's the scoop.

Schwachman’s sound is best described as tuneful melodic rock, ala Coldplay or Radiohead. His vocals are very smooth, often in head voice range, and well delivered. The music has little or no rough edge to it. Destiny starts out the album with some off vocal effects laid over a bed that is more bass, drums and ambient keyboard than anything else. The chorus on Destiny is a rock chant (think Gregorian) mainly alternating on two notes. Dying To Feel Alive is more dynamic than Destiny, but holds onto a strong sense of melodic melancholy. Rise Above continues the ascent of Uncharted Territory, with a moderately commercial pop tune with a real sense of melody (but still retaining the maudlin aspect). Side Of The Road is an eclectic pop tune with some interesting instrumental work, while Soulmate is mix-tape entry here. Other songs of interest are Do You Know, See Through and Samantha.

Matt Schwachman falls prey to his own melancholy on Uncharted Territory. The music is well performed and fits loosely into the gap between Radiohead and Coldplay, but lacks the true pop sensibility of Coldplay while missing the ambient edginess of Radiohead. In the end, Uncharted Territory is a pleasant listen – mellow ear candy really; but after playing it several times the listener is left with no real strong impressions about Schwachman or the album.

You can learn more about Matt Schwachman at www.myspace.com/mattschwachman. You can purchase a copy of Uncharted Territory at www.cdbaby.com/cd/mattschwachman or purchase downloads through iTunes.
Posted by Wildy at 5:00 AM